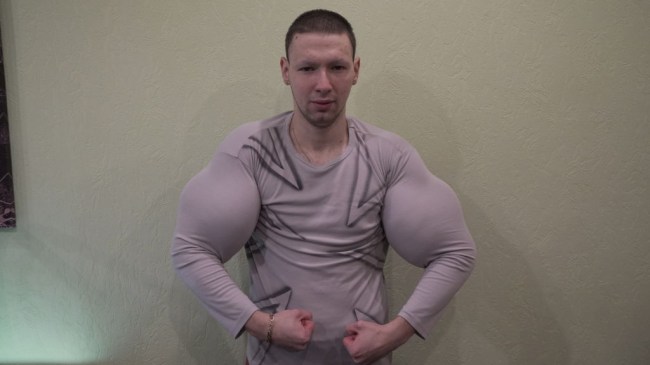 Let me introduce you to Kirill Tereshin a.k.a. Bazooka Arms. He is Russian ex-army soldier and if you didn’t notice has literal Popeye arms attached to his body. Apparently, the man wasn’t pleased with his progress in the gym so he decided to pump his arms up with synthol, you know, as one naturally does.

There are reports out there that he’s at risk of losing his arms, but it doesn’t appear that he’s stopped injecting himself. His Instagram is private, but he’s definitely living that injection life as he has three emojis in his bio; a Russian flag, a syringe, and a gorilla.

Among the rumors, he’s trying to earn enough money to travel to the UK and seek treatment and as a result has gotten himself into some contests like slapping fights, which he was thoroughly beaten in.

Tereshin decided to take a step up in the fight game and try his hands – and arms – inside the octagon in an MMA fight. Who dared to step up to this man you ask? Well, none other than a 40 something-year-old blogger named Oleg Mongol.

Things did not go well for Bazooka Arms. The fight lasted all of three minutes before the undersized, much older blogger forced Tereshin to the ground making him tap with his forearm pinned to his throat.

I think I speak for all bloggers here in saying damn, it feels good to see one of our guys get a W. I also don’t think I’m the only one that watched those highlights constantly worrying that one of the guy’s arms may literally pop like a balloon.

Tereshin told the Sun that he needs to raise around $47,000 for the procedure and here’s to hoping he gets the work done that he needs.