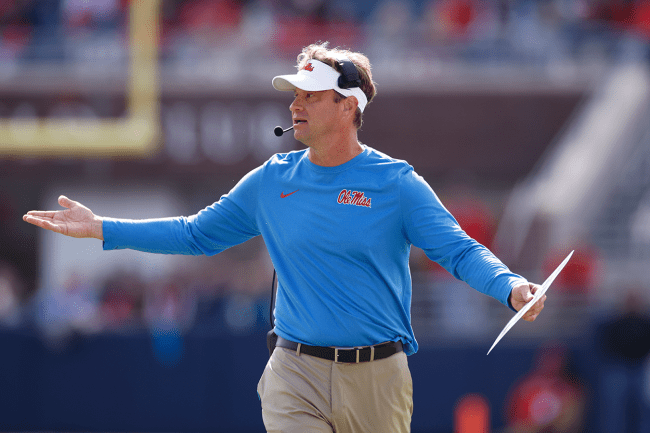 Lane Kiffin is a polarizing personality. You either understand the way he operates and love him, or are too blind to see his brilliance and hate him.

Of the many things that Kiffin does well, but also causes divisive opinions, is social media. In particular, he is a Twitter mastermind.

Over the weekend, he had a little bit of help.

Ole Miss hosted its final recruiting weekend before the dead period and had a few big-name prospects in town. As a part of the visit, Kiffin let some of the recruits get behind the wheel of his Porsche for some of the coldest recruiting photoshoots that you will ever see.

One of the recruits was four-star cornerback Davidson Igbinosun. The former Rutgers commit is considered likely to join Kiffin in Mississippi and posted a series of photos captioned “chillin with kiffin in the porsche #partyinthesip.”

In response, a current Rutgers commit decided to troll his former recruiting classmate and Kiffin. Not long after Igbinosun posted his photos, three-star edge rusher Kenny Fletcher posted something similar.

Fletcher, who will be a Scarlet Knight next year, posted a picture with a Rutgers assistant coach outside of a porsche with the caption “chillin with fran in the porsche #partyinjerseyyy.”

It was a direct shot at Igbinosun and Kiffin.