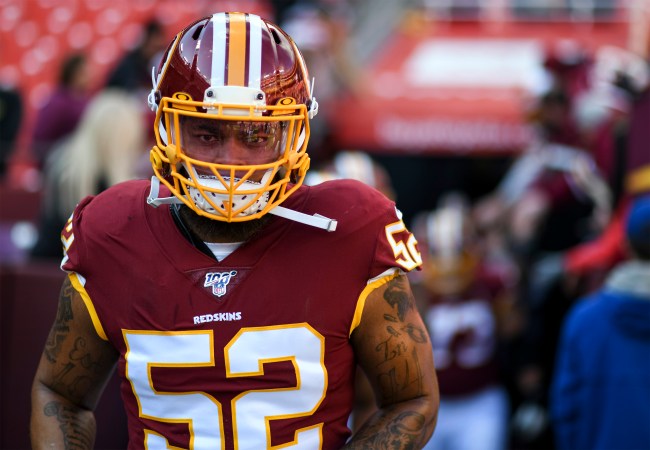 When it comes to playing football, Washington Redskins linebacker Ryan Anderson sure sounds like he’s ready to risk it all in order to leave his mark. And, yep, that means he’s willing to majorly fuck up his long-term health in the process, ignoring any concerns about CTE or brain damage once he’s older.

While the NFL is trying to crack down on eliminating head injuries as much as possible given the alarming number of former players developing trauma later in life, the 25-year-old Anderson doesn’t seem to pay much attention to the risks, and actually once claimed to a former teammate that he plays so aggressively in order to forget his grandkid’s names one day. Yikes.

During a recent episode of the Redskins Brawl podcast, one of the co-hosts — former Redskins tight end Garrett Hudson — was talking about Ryan Anderson’s future with the team. With the defender entering his fourth year in Washington, Hudson offered some insight as to what kind of player the defender is, and the type of mentality and passion that he plays with on every single down.

“Of the people that were on the team when I was there in 2018, I don’t think anybody hits harder than Ryan Anderson. I’ve heard him call himself the billygoat, the bulldog and the ram. And he would frequently yell those things at me after he would spear me in the chest,” Hudson said.

Well, that led to Hudson talking about some of the nicknames Anderson uses to refer to himself — like “Billy Goat”, “Bulldog” and “Ram” — and even led to the former tight end describing a conversation he had with the linebacker about why he plays so hard all the time. Ryan Anderson’s reasoning literally has to give the NFL chills.

Redskins linebacker Ryan Anderson explains why he plays as hard as he does. pic.twitter.com/sCBQpBy0tw

“I remember a conversation in the hot tub after practice and I was like, ‘Dude, why are you going so hard all the time?’ And, this is a quote, this is verbatim, he said, ‘If I can remember my grandkids’ names then I didn’t play the game right.’ So he is a lunatic. He has the mentality to play the inside linebacker position.”

Anderson is still in his mid-20s, guys, and the fact that he allegedly told his former teammate that he plays to forget his grandkid’s names is terrifying. It literally means he’s willing to beat his body (and mind) into the ground for the chance at playing in the NFL. That just seems all sorts of fucked up.

Naturally, Ryan Anderson’s comments raised some red flags among people on Twitter after Garrett Hudson referenced the story, with lots of fans shocked to see that kind of mentality from the linebacker. Take a look below at some reactions.

Big yikes… this is really harmful to men… so you can only be a tough guy a manly man if you get brain damage… man, if only we had a term for this harmful manliness…

So will he, apparently.

Someone tell him about Junior Seau.

It’s one thing to play hard, it’s another thing to have the mentality that Ryan Anderson apparently plays with — which is damaging himself no matter the consequences. Here’s to hoping somebody talks to this dude about changing that mindset a little bit and protecting himself a little bit better, because forgetting your grandkid’s names isn’t something most of us should want to aspire to do.