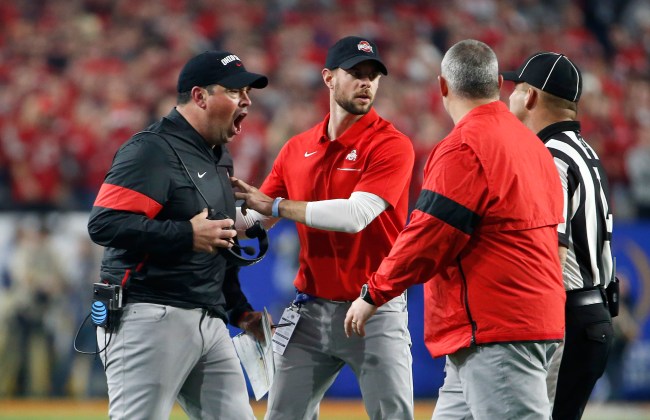 Now that the Big Ten Conference announced an abbreviated football season starting on October 23, everybody in the league is doing what they can to stay safe from COVID-19, making sure that things kick-off as smoothly as possible. And one way that Ryan Day and some of his Ohio State football coaches are doing so is by sacrificing their personal lives. No, really, Day and some other Buckeye coaches are literally living at the team’s facility, hoping that the isolation from family members will decrease their risk of contracting the virus.

We’ve seen how bubbles have successfully worked in both the NBA and NHL, and how MLB incorporated one as the postseason has progressed, so it appears that Ryan Day and Ohio State football is following a similar blueprint. Of course, Day was quick to say it wasn’t mandatory for coaches to live at the facility, but that some took it upon themselves to do so as a safer way to paying a full college football season.

Coach Ryan Day said there’s no requirement on where coaches must live but said some have chosen not to stay with their families because of the COVID-19 risk.

“I don’t think people realize the sacrifices everyone is making to play a season,” Day said Friday.

Ohio State is conducting daily COVID-19 testing for 120 players and 50 staff members deemed to be in “Tier 1” because of their regular contact with players.

“Didn’t put any guidelines in place or tell somebody how to handle their business at all,” Day said. “We just talked about how having school-aged children who are going to school is a risk. They’re at school, they’re exposed. Some of the sports leagues are still going on and they’re playing. It’s an exposure, it’s an unknown, so to be aware of it; each guy’s handling it their own way.

I know everybody’s doing what they can to stay safe from this damn COVID-19 shit, but, kudos to Ryan Day and some of his Ohio State coaches for taking it upon themselves to set up an abbreviated bubble situation to show his team how serious they are about it. The Buckeyes are a top-3 team in the country with a legit chance at winning the National Championship, and Day and some of his coaching staff are proving to players they’re all in on making sure the season runs smoothly.

On the flip side, damn, what a bummer for these guys to be away from their families on their own accord. Sure, go ahead and run the jokes about voluntarily avoiding family being a good thing, but this has to be difficult AF for everyone. Ryan Day mentioned how hard it’s been, and how it’s a fluid situation each day, but said the facility brings an extra layer of protection given the amount of testing going on.

“My family, we’re still trying to figure this part of it out,” Day said. “This is all new for us, major challenge, but we’re working through it and you try to figure out what’s best. When I go in the house, I’m wearing a mask. It’s one of those things that our staff is very, very concerned about their day-to-day operation.”

“Here, when we’re in the building, we feel really, really safe,” Day said. “We know there’s 170 people who test daily that are clean. It’s a great feeling to know when you’re around our bubble here, you’re good. But once you leave here, everything changes. Honestly, it’s scary because it can ruin your whole season just like that with one day, with one exposure.”

There’s a ton of pressure on college football to get this thing right given the risk involved. I mean, shit, nobody knows how to properly navigate a season during a global pandemic, but at least Ryan Day and some of his coaching staff is doing their best. With Big 10 rules stating that any player who tests positive for COVID-19 will miss at least 21 days before returning to competition, the Buckeye coaches are just stressing how crucial it is to avoid as much contact with potential spreaders as possible.