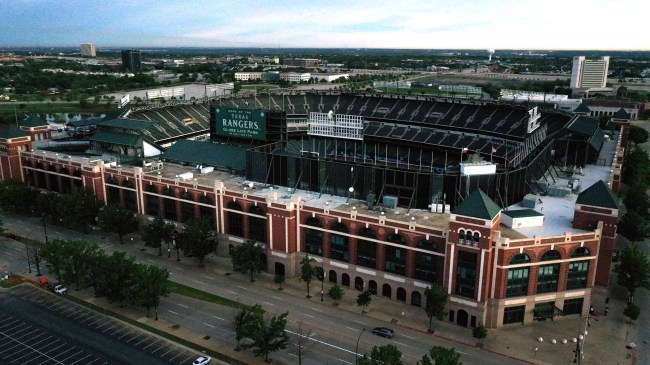 It was recently reported that Major League Baseball teams will be banned from breaking out the champagne to celebrate postseason wins over safety concerns, but that’s not the only change we will see during the MLB playoffs.

These teams also will not be allowed to celebrate, or do anything else for that matter, within the confines of their home parks – unless they are the Texas Rangers, Houston Astros, San Diego Padres or Los Angeles Dodgers.

That’s because those four teams’ stadiums will be used for a Major League Baseball playoff bubble this fall with the Rangers’ (heavily criticized) new park hosting the World Series.

According to ESPN’s Jeff Passan, the MLB bubble locations being proposed look like this…

Under the plan, the World Series would start Oct. 20 at Globe Life Field in Arlington, Texas, and would end no later than Oct. 28. It would culminate a month of playoff games that begins with the top four seeds in each league hosting all the games in a best-of-three wild-card series. The four American League series would run Sept. 29, Sept. 30 and Oct. 1, and the National League would play Sept. 30, Oct. 1 and Oct. 2.

The highest remaining seed in the NL would play its division series in Arlington, while the next-highest seed would face its opponent at Houston’s Minute Maid Park. The top seed from the AL would be the home team at San Diego’s Petco Park, while the other series would be held at Los Angeles’ Dodger Stadium. The AL Championship Series would take place in San Diego and the NLCS in Arlington, giving the NL’s top seed — likely the Los Angeles Dodgers — a path to a stationary October.

Considering the Rangers currently sit at 17-30 and last in the American League West, they won’t be able to benefit from the bubble. However, if the season ended today, here’s how the MLB playoffs would stack up, according to ESPN.

Wild Card games will still be held in the top seeds’ home stadiums, but as it currently stands no teams will get the benefit of a home field advantage as the American League playoffs will be held in National League parks and vice versa until the World Series, and the Rangers won’t be making an appearance there.

The MLB Players Association still has to give its official approval of the bubble plan, which as we have seen from previous negotiations this year and the fact that some teams, like the Twins, are strongly opposed to the idea, means the plan is far from a done deal, but according to The Athletic’s Ken Rosenthal it should be approved on Tuesday.