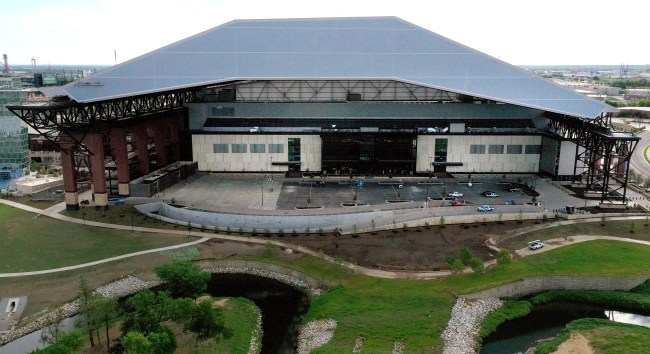 The Texas Rangers new $1.2 billion stadium Globe Life Field, home of the worst, most vile ballpark food in Major League Baseball, was originally scheduled to open in March. However, thanks to the ongoing global pandemic and MLB finally getting its act together, announcing a July 23 or 24 start date to the 2020 season, fans are finally starting to pay attention again. (Aren’t they, Houston?)

The new Globe Life Field, which cost taxpayers around $500 million and has so far only played host to some high school graduations, will be replacing the team’s “old” stadium, Rangers Park at Arlington, built wayyyy back in 1994.

Texas is also the only state with teams in Major League Baseball that will be allowing fans to attend games, thus giving the Rangers and Astros a distinct home-field advantage once the season begins.

Globe Life Field’s capacity is listed at 40,300, which means, according to Texas governor Greg Abbott, they can host around 20,150 people per game who may or may not be wearing masks despite the number of new cases going through the roof in the state. (But is it a retractable roof?)

On Tuesday, the stadium and the team shared video showing off the Rangers’ new digs.

Unfortunately for them, reactions to the new ballpark were probably not as positive as they and the team had hoped.

Everyone seems to love the Texas Rangers’ new stadium. pic.twitter.com/uaA9LrbtpT

The Texas Rangers have unveiled a brand new stadium designed purely to troll the Astros by looking like a trash can. 🗑 https://t.co/AL3hqKtHxz

It can be a baseball stadium *or* a big box warehouse lawn and garden center, making Globe Life the world's worst Transformer. pic.twitter.com/6nqXoU7Qzm

Smart of the Rangers to future-proof their new stadium… pic.twitter.com/YJ0Ijmx1zM

The new Texas Rangers stadium vs. the new range hood I just installed in our kitchen: who wore it better? pic.twitter.com/p5hN0zJIzu

Yo, the @Rangers really based the new park's design on the Chernobyl Sarcophagus???? That seems like a bad omen. pic.twitter.com/UnMcgq8Hza

the texas rangers new stadium looks like the battlebot that used to flip the other robots over pic.twitter.com/4Dp6qUFtqL

People are ripping on the new ranger's stadium but you haven't even seen the inside yet pic.twitter.com/5lj26yLU25

The #Arlington @Rangers heard their old stadium was so damn hot, they built the new one in an HVAC Duct pic.twitter.com/buejYdTzXv