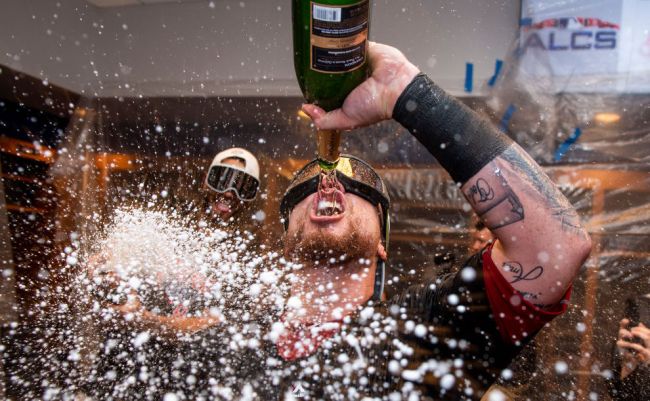 Baseball traditionalist may still care way too much about the sport’s idiotic unwritten rules and Angel Hernandez is still making the kind of atrocious calls that make you wonder how the hell he’s still an umpire, so even though plenty of things have stayed the same during the 2020 Major League Baseball season, the league was still forced to institute plenty of changes in order to make sure it could be played in the first place.

It didn’t take long for the consequences of declining to adopt the resoundingly successful bubble strategy that allowed the NBA and NHL to resume play without any major hitches to rear their ugly head but the MLB has still taken plenty of steps to mitigate the risks that come with playing in the middle of a pandemic. As a result, we’ve been treated to some fairly surreal confrontations between managers and umps that feature decidedly less spittle than usual and players have had to adjust to not being able to regularly deposit their saliva on the diamond and figure out other ways to congratulate their teammates on a job well done that doesn’t involve patting their butts.

However, according to a report by The New York Post, it looks like we may be treated to what will possibly be the most jarring tweak of all once the postseason approaches. The outlet says MLB teams who have become accustomed to commemorating major playoff-related wins by covering the clubhouse in plastic and breaking out the goggles to shield their eyes from the champagne showers traditionally at the center of those celebrations will have to figure out another approach, as the league is reportedly on the cusp of banning alcohol from being used in those rituals due to safety concerns.

Sure, there’s only so much you can do to stop players from coming into close contact while marking a big achievement (they’ll also be urged to savor the moment on the field as opposed to in the locker room) but preventing multiple people from taking swigs from the same bottles of bubbly and pouring backwash-filled containers of booze over the heads of their teammates is probably a good call considering the circumstances.