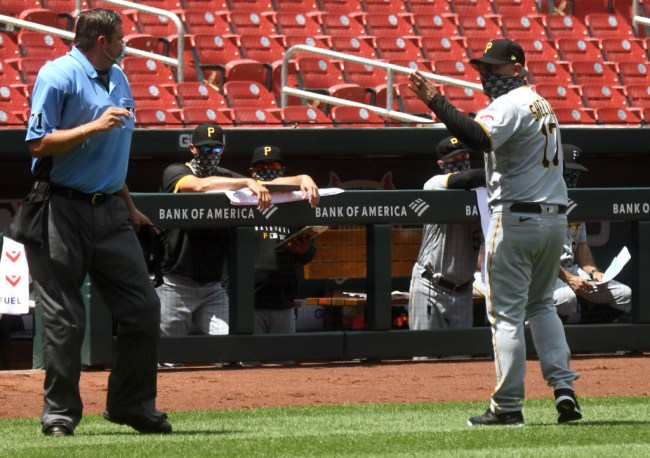 Of all of the leagues that were forced to put their season on hold, no one had more trouble trying to figure out how to resume play than Major League Baseball. While the NHL and NBA mostly had their shit together when it came to devising a plan to return to action, MLB players and owners could not figure out a way to sort out their differences, forcing Rob Manfred to resort to the nuclear option to ensure there would be some semblance of a season.

As a result, baseball is back, baby! However, there’s no telling how long that’s going to be the case when you consider 10 members of the Marlins have tested positive and two games that were scheduled from Monday night have been canceled. The fact that things have already started to implode three games into the year probably isn’t the best sign, so while the approach Manfred decided on may prove to be disastrous, it’s not like guys aren’t trying to do what they can to promote a safe environment.

.@ARizzo44 is making sure first base stays sanitized 😂#ThisIsMyCrew pic.twitter.com/javz3v0Zoh

We knew that things were going to look a bit different based on all of the new pandemic-induced measures that have been implemented, and over the weekend, we got our first look at what it looks like when umpires and managers hash out their differences in this new reality.

Historically speaking, these arguments usually involve umps having their personal space violated while getting hit in the face by spittle flying out of the mouth of an angry manager who has to be restrained by a coach, but in an era where social distancing and face coverings reign supreme, that approach is fairly frowned upon.

On Sunday, Pirates pitcher Derek Holland was chilling in the stands in left field instead of the bullpen where he’d reside during a normal season, and while there’s no indication he had a couple of beers in him, he still couldn’t stop himself from channeling his inner bleacher creature and heckling home plate umpire Jordan Baker.

Baker somehow heard the jeers and ejected Holland, which resulted in Pirates manager Derek Shelton coming out of the dugout to discuss the development. However, the two men didn’t get in each other’s faces as we’re accustomed to, as Baker took the time to put on a mask while Shelton did what he could to keep his distance in what was a pretty surreal exchange.

Yeah, this is definitely going to take some getting used to.