Fernando Tatis Jr. Had To Apologize For Hitting A Grand Slam Because Baseball’s Unwritten Rules Are Stupid 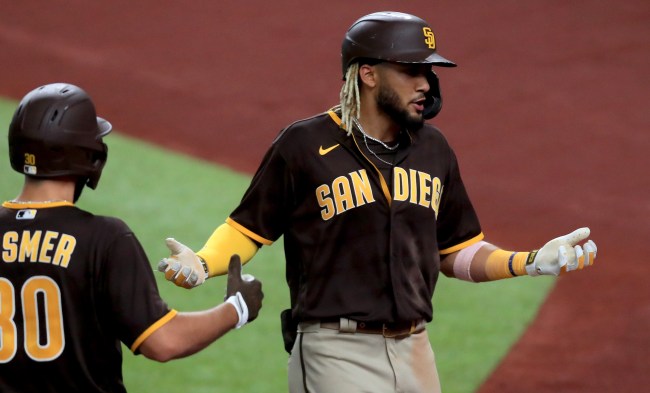 An example of his amazing talent was on display Monday night during San Diego’s game versus Texas when Tatis hit two home runs and drove in seven runs in the Padres’ 14-4 win over the Rangers.

It was the kind of night most players dream of having, and yet, Tatis was forced to apologize after the game for… doing too well?

Apparently, the problem both the manager of the Rangers, as well as his own manager, had with Tatis’ performance is that his second home run – a grand slam – came on a 3-0 count with the Padres up by a score of 10-3 in the eighth inning.

I guess you’re not supposed to do that, according to baseball’s ridiculous unwritten rules, which also apparently involve throwing behind the next batter to send some sort of message.

The Rangers just threw behind a Padres hitter because the previous hitter (Fernando Tatis Jr.) hit a granny on 3-0.

Here's a thought: how about you learn how to not give up 14 runs and not give up 7 RBI to a kid who can barely legally buy a beer. pic.twitter.com/y68zDQW8dS

“There’s a lot of unwritten rules that are constantly being challenged in today’s game. I didn’t like it, personally,” said Rangers manager Chris Woodward. “You’re up by seven in the eighth inning; it’s typically not a good time to swing 3-0. It’s kind of the way we were all raised in the game. But, like I said, the norms are being challenged on a daily basis. So just because I don’t like it doesn’t mean it’s not right. I don’t think we liked it as a group.”

Cry me a river, Woodward.

The crazy part is that Padres manager Jayce Tingler also chastised the superstar for ignoring the take sign on that pitch.

“He’s young, a free spirit and focused and all those things,” said Tingler. “That’s the last thing that we’ll ever take away. It’s a learning opportunity and that’s it. He’ll grow from it.

“Just so you know, a lot of our guys have green light 3-0. But in this game in particular, we had a little bit of a comfortable lead. We’re not trying to run up the score or anything like that.”

So, after having a career night – at the age of just 21 – Tatis was basically forced to apologize rather than celebrate.

And here we have Tatis apologizing for hitting a home run lol pic.twitter.com/1iTm6lTUyc

“He told me I was getting the sign to take a pitch, and I told him right away, ‘That was on me. I didn’t look in (at third-base coach Glenn Hoffman),’” said Tatis after the game.

“Those experiences, you got to learn from it,” added Tatis. “Probably next time, I take a pitch now that I learned from it.”

Even pitcher Trevor Bauer thought Tatis apologizing for being too good was completely unnecessary.

So you take a pitch...now you're 3-1. Then the pitcher comes back with a great setup pitch...3-2. Now you're ready to groundout into a double play. Everyone should hit 3-0. Grand Slams are a huge stat. @tatis_jr https://t.co/4D3ilsD9Sh

And Major League Baseball wonders why it has so much trouble drawing fans.

I don’t want to live in a world where Fernando Tatis Jr. takes a pitch that he could have swatted for a home run.

2. Keep swinging 3-0 if you enjoy winning and success.

3. Ignore the haters and don’t apologize for it.