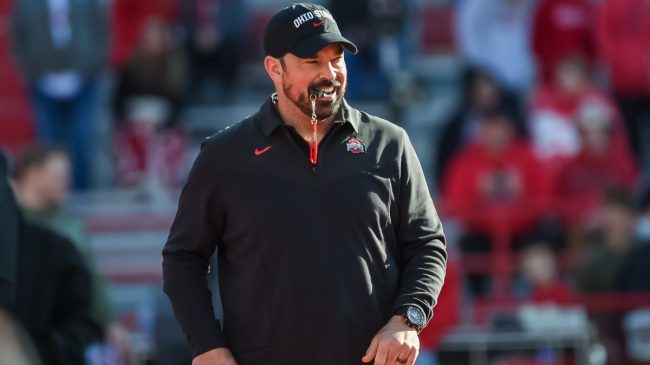 Ryan Day is looking to get the Ohio State Buckeyes back to the College Football Playoff.

The team missed the postseason tournament in 2021 after dropping its regular season finale to the Michigan Wolverines, instead having to settle for the Rose Bowl. And an exciting game that was.

The Buckeyes went back at forth with the Utah Utes, eventually winning a 48-45 shootout. Day is looking to use that momentum on the recruiting trail while pushing to make a second national championship appearance in three years.

One way to get back to the playoff is through recruiting. Over the weekend, Day and the Buckeyes hosted a number of high school prospects for an offseason workout.

Day was seen dropping dimes to those recruits, looking like a flashback from his days at New Hampshire.

Day was throwing darts to recruits in attendance, including this 40-yard bomb. While it may come as a surprise to some, Day has done this in the past.

In fact, while at the University of New Hampshire, Day set passing record under center for the Wildcats.

From the New Hampshire athletic site.

In his tenure as Wildcat signal caller, Day set nine UNH records, including career marks for pass completions (653), touchdown passes (53), completion percentage (59.9 percent) and total offense (8,492 yards). He is still ranked third in program history in pass attempts (1,089) and fourth in both passing yards (7,670) and completions.

Interestingly enough, his OC with the Wildcats was UCLA head coach Chip Kelly.

Day was reliving those glory days in this recent offseason workout. It looks like he’s still got it.