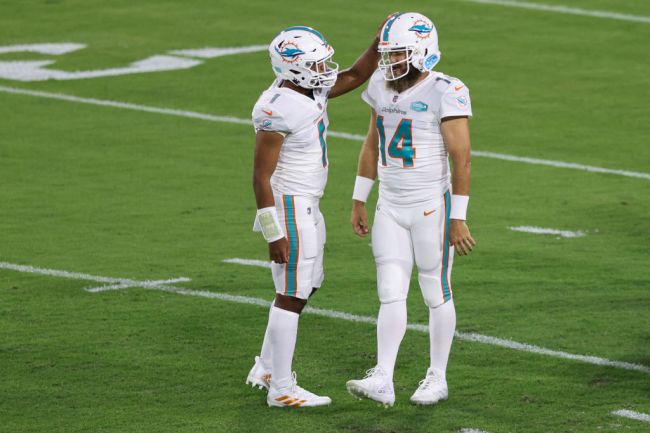 Ryan Fitzpatrick is amidst one of the most unique situations in the NFL, and he knows that. It can’t be easy to be a starting quarterback in the league knowing that the player below you in the depth chart will eventually take your job away from you. It has to be especially hard given the fact that Fitzpatrick doesn’t know when Tua Tagovailoa time will come in Miami, only that it is indeed coming.

The veteran QB is handling the situation pretty well, however. In fact, he’s ready for Tua Time just like the rest of us are and seems to be doing everything in his power to make sure the former Alabama quarterback is prepared for whenever his name is called.

“With Tua, just being able to slow down sometimes, to be able to take the extra minute to explain something. — my thought process or to sit on the bench during a game and instruct and talk and answer questions — that stuff is maybe a little bit different than how it would go normally,”  Fitzpatrick told Peter King.

“But I know what my role is. I know that I’m keeping the seat warm for him. I know the talent that he has and I’m excited whenever he gets his opportunity. I feel like I’m going to play a big part in that.”

Fitzpatrick has seen just about all there is to see around the NFL having bounced around the league his entire career and understands that the NFL is indeed a business and his business role in Miami right now is to help Tagovailoa any way he can and keep the Dolphins competitive in the process. So far, so good.

The Dolphins are 1-3 on the year, but those three losses came at New England and at home to the Bills and Seahawks by a combined 21 points. Miami hasn’t lost a game by more than 10 points so far this season and Fitzpatrick has already thrown for 994 yards completing 69% of his passes.