Dolphins QB Ryan Fitzpatrick Is Really Sad About Getting Benched For Tua Tagovailoa ‘My Heart Just Hurt All Day, It Was Heartbreaking For Me’ 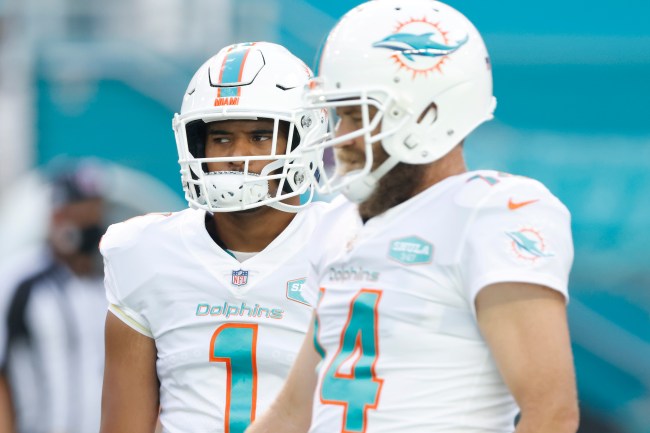 Ryan Fitzpatrick doesn’t seem to be thrilled about getting benched.

On Tuesday, the Miami Dolphins shocked the NFL world when they announced rookie Tua Tagovailoa would start in week 8 despite the fact that Fitzpatrick had played pretty well and put the team in playoff contention.

Dolphins head coach Brian Flores explained that he believed starting Tagovailoa was the move he needed to make after seeing the young QB’s improvements during practice.

We feel like through practice meetings and walk-throughs that he’s ready, and that’s how we’re going moving forward,” Flores said. “[Ryan Fitzpatrick] has done a great job. He’s been productive. His leadership has been great. It’s not an easy decision for me or us as an organization, but we felt like for the team now and moving forward, this is the move we needed to make.”

Fitzpatrick spoke to the media about the benching, and gave some pretty heartbreaking quotes on how he’s dealing with the whole situation.

#Dolphins' QB Ryan Fitzpatrick says he was "shocked" when he was informed that the team will be making him the backup. "My heart just hurt all day. It was heartbreaking for me."

Hopefully, the Dolphins do right by Fitzpatrick and trade to a place that could use him now that the team has made it clear that Tua is going to start from here on out.