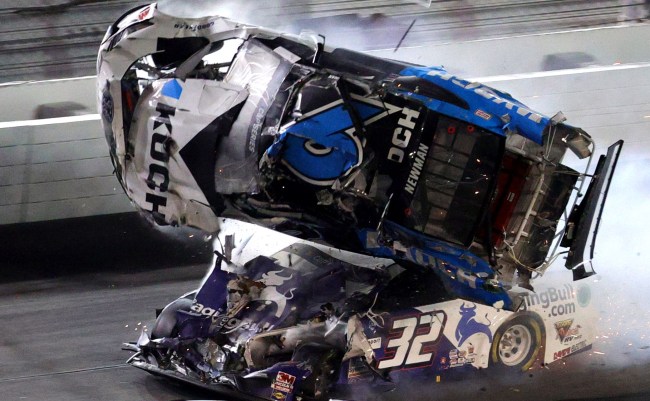 Anyone who was watching the 2020 Daytona 500 and saw the impact Ryan Newman took when he got sideways on the final lap of the race held their breath wondering if the veteran NASCAR driver was even going to survive.

When he did not exit the car on his own and the NASCAR medical staff was forced to extricate him everyone watching feared the worst.

Here is the final lap of the Daytona 500 in which Ryan Newman's car was flipped at the line.

We will continue to keep you updated on his status as we learn more. pic.twitter.com/qkEwQBpoP0

Later in the day it was revealed that Newman’s injuries were “not life threatening,” but he was in “serious condition” with undisclosed health issues.

Around 48 hours later, in a more than suprising development, Newman walked out of the hospital without so much as a broken bone.

And while by all appearances he appeared to be just fine, Newman told the media on Thursday that it took “multiple miracles – big miracles and little miracles, in my opinion – that aligned” to allow the 42-year-old driver to escape relatively unscathed from the terrifying crash.

“They were trying to keep me in a somewhat of a medically-induced coma, from what I’ve been told, and that medicine kind of zoned me out,” said Newman. “So I really don’t have any memories or recollection of any of my crash until I actually had my arms around my daughters walking out of the hospital. Again, when they give you those medicines and you’re knocked out, you don’t know what’s going on. I was able to walk out in the condition that I was and as I watched in the next, call it 24 hours, as I watched the crash and had to make myself believe what I had went through, I really looked to my dad to say, ‘Hey, did this really happen?’ It’s crazy. I’m happy I’m here.

“I was just treated so that I could be calm so that they would kind of numb my brain, so to speak, so that I could just sit there and rest. I wouldn’t call it a vegetative state, but I wasn’t a fruit either. I was meant to be relaxed.”

“Everything aligned perfectly for me to be alive and here with you today,” said Newman. “There were multiple miracles that aligned for me to walk out days later with my arms around my daughters.”

Newman says he still doesn’t know if the car of driver Corey LaJoie made contact with his helmet when it broadsided his car at around 170 mph.

“Everything happened really quick and everything was all in that compartment, basically, and I guess it would be like a case of high-quality whiplash that kind of happened when I was hit.”

That’s certainly one way of putting it.

Newman will be back behind the wheel when NASCAR returns to action on Sunday in Darlington.