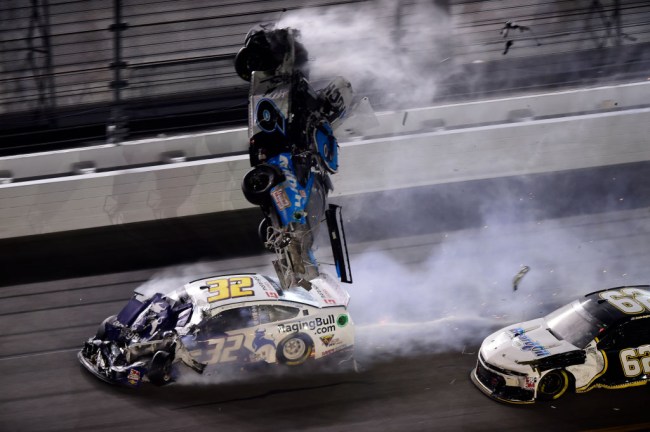 In the final lap of the 2020 Daytona 500 on Monday night, there was a horrific crash that sent driver Ryan Newman to the hospital.

UPDATE: Sources say that Ryan Newman is in serious condition following the horrific Daytona 500 crash. NASCAR released a statement on Newman’s condition and said his injuries are not life-threatening.

Newman’s Koch Industries Ford was nudged from behind by Ryan Blaney, which caused his automobile to collide into the wall and then flew in the air. Newman’s vehicle was catapulted into the air, flipped several times, and crashed to the pavement of Daytona International Speedway.

Here is the final lap of the Daytona 500 in which Ryan Newman's car was flipped at the line.

We will continue to keep you updated on his status as we learn more. pic.twitter.com/qkEwQBpoP0

You don’t fully understand the magnitude of a crash until you see a picture like this.

Ryan Newman has been taken to an area hospital.

In slow motion, you really get an idea at how violent that accident was… Thoughts going out to Ryan Newman and his family. pic.twitter.com/d2Sg2PgxbV

Newman’s wreck of a car skidded on its side down the track in a fireball until finally stopping. The car did actually cross the finish line, but was engulfed in flames. Ross Chastain and Chase Elliott were also involved in the crash.

A heavy hit for many contenders late in the #DAYTONA500. @RossChastain and @chaseelliott are among those involved. (📺: FOX) pic.twitter.com/LJnTr6zsR6

This is the craziest video of the Ryan Newman wreck. Prayers up pic.twitter.com/bBFkFu8cKm

My dad was sitting right where Ryan Newman crashed at Daytona pic.twitter.com/2KeRWiF8FO

Emergency crews rushed to the crash site, and blocked the crowd from seeing Newman.

Heard crowd cheering but couldn’t see much. One of Newman’s crew said he didn’t know if he was okay as he walked by. A Penske employee told me he is awake. #Daytona500 pic.twitter.com/KdQyphdFYc

At the end of our road where crews are attending to Ryan Newman after a brutal wreck at the end of the #DAYTONA500. No word yet if he’s okay or even out of his car. pic.twitter.com/ihQ3KtAME1

Newman was rushed to a Daytona Beach-area hospital after being removed from his car. There was no immediate word on his condition, but it is reported that he was awake.

A stretcher is next to Newman’s car. Crews are using black screens to keep fans from seeing. And media has just been told to leave the pits. #DAYTONA500 pic.twitter.com/OFFIpTWcoz

FOX Nascar just reported they’ve been able to extract Ryan Newman from his car and he was loaded into an ambulance and taken to a local hospital. Seriously scary crash. https://t.co/E3wsHrBOvl

Newman was reportedly taken to Halifax Health center by ambulance.

Last Thursday, Newman announced that he and his wife Krissie were separating after being married for 16 years. They have two daughters.

Newman, who won the 2013 Brickyard 400, was credited with a fourth-place finish on Monday.

After two red flags and two overtimes, Denny Hamlin barely sneaked past Blaney at the finish line to win the “The Great American Race,” his second straight Daytona 500 victory, and third in his career. Hamlin became the first driver since Sterling Marlin in 1995 to win the Daytona 500 in consecutive seasons and became the seventh driver to win three or more Daytona 500s.

Hamlin said Ryan Newman is a “tough guy” in his post-race speech.

Says he’s like everyone else just waiting for an update on Newman. pic.twitter.com/IpNrKEvDN0

I hope Newman is ok. It look nasty to me. Praying for him

Just about to take off on a plane, but watched the end of the race on my phone. Just hoping for good news on Ryan Newman.

Can’t pray enough for Ryan Newman. The angle of the car hitting him once he flipped over is frightening. We can only pray to God that he is ok, and all our fears will go away. 🙏🏼

Hope @RyanJNewman is okay. Scary crash at the end of the #Daytona500
Hope to hear news soon!!

Wow crazy finish to the #DAYTONA500 !!! But man I’m worried about Ryan Newman. That was a big hit! Fingers crossed he’s ok.

Man that was big hope @RyanJNewman is ok… prayers 🙏🏼🙏🏼

Our deepest thoughts and prayers are with @RyanJNewman right now.