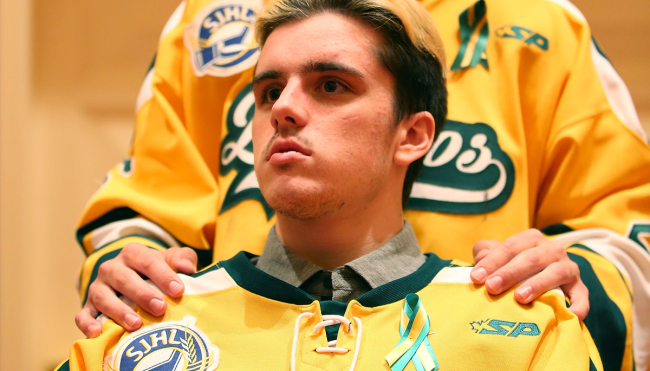 It’s been over three years since the hockey community rallied around the Humboldt Broncos in the wake of the tragedy that claimed the lives of 16 people when the bus carrying members of the Saskatchewan Junior Hockey League team was blindsided by a truck.

The other 13 victims who were injured faced a long road to recovery—especially Ryan Straschnitzki, who suffered spinal cord damage that left him paralyzed from the chest down. However, he didn’t waste any time gearing up for his return to the ice, as he announced his plans to compete in the Paralympic Games just a few days after he was rushed to the hospital.

The defenseman known as “Straz” has come a long way since then, as he was able to move one of his legs after undergoing surgery in 2019 and even managed to take a few assisted steps after traveling to Thailand to have a stimulator implanted later that year.

Bout time he got off his ass. 1st time since he boarded the bus that horrendous day. 2nd day of doing this. Therapist helping with knees and ankles so they dont buckle. Ryan did so good, I sent him to the beerstore for me. Im thinking he didnt go as Im still waiting. #thirstySON pic.twitter.com/memXrR4yX1

On Thursday, Straschnitzki shared an awesome update concerning his recovery when he posted a video of himself standing on his own with the help of the walker for the first time since the crash.

Trying out the walker for the first time ! thankful for the physios that push me to be the best I can every session. One step closer than I was the day before 👊🏻 pic.twitter.com/PHw6HHg6Ys