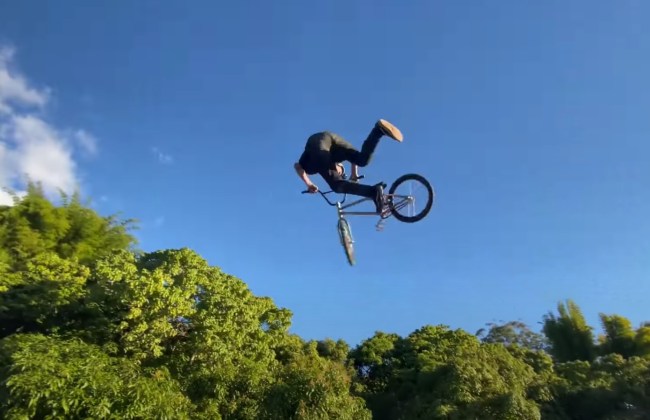 It has been a hot minute since the last time I got a BMX bike, probably half a lifetime actually, but I still love watching these riders throw caution to the wind and hitting massive jumps that would make a normal person shudder with fear.

Ryan Williams is a professional BMX rider for Nitro Circus who travels the world and hits sick jumps along the way. He’s amassed 1.5 million fans on Instagram and has 1.41 million subscribers on YouTube. So if you’re tapped into the sport then the chances are you know who he is already. For everyone else, he’s kind of a big deal.

After ‘over 20 tries and months of preparations’ he just became the first BMX rider to nail a 360 Double Backflip on a BMX bike. He uploaded the footage of him landing this new trick to his YouTube channel on Sunday and we can see him hit the world’s first 360 Double Backflip from a few different angles and really takin just how absurd this trick is.

Here’s the clip from YouTube and Instagram so you can watch it on your preferred medium. The footage shows the 360 Double Backflip from a few different angles including his helmet cam:

It is pretty incredible that there are still tricks out there that riders can be the first to land. All you need in order to become the first in the sport is a bike and a jump and you can ride your way into the record books.

In old/established sports like Figure Skating or Gymnastics, for instance, they pretty much have a set number of tricks that are available to the athletes to bust out in the competition and it’s a matter of stringing them together in the most difficult way possible. But with BMX, Skateboarding, and Snowboarding there’s still room for innovation. You just have to be willing to put your body on the line.