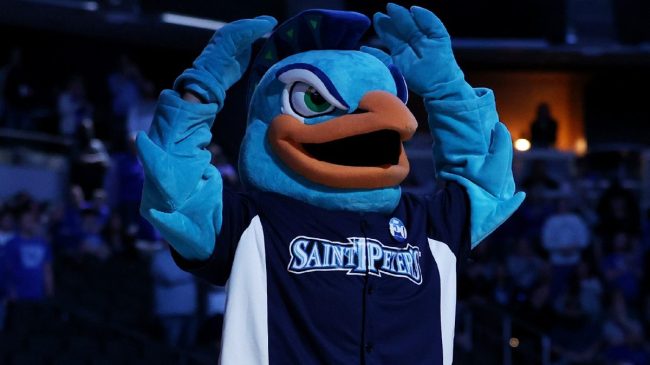 The Kansas Jayhawks completed a come-from-behind victory over North Carolina on Monday night to land its fourth NCAA Tournament championship in program history.

Kansas had to overcome a 16-point first half deficit to land the win, but they survived in the end with the Tar Heels missing a game tying three-pointer as time expired.

The matchup was one for the record books.

North Carolina center Armando Bacot set an NCAA Tournament record by tallying a double-double in each of the six rounds of play. It was one of five double-doubles recorded in the national championship game, which also set a March Madness mark.

When the thrilling game was through, fans took to social media to post their reactions. One reaction, in particular, grabbed the attention of the college basketball world.

Cinderella team Saint Peter’s made history this year by becoming the first No. 15 seed to advance to the Elite Eight. The Peacocks took down the likes of Kentucky, Murray State, and Purdue before falling to North Carolina ahead of the Final Four.

Check out the social media team’s reaction to Kansas’s win over the Tar Heels.

The Peacocks don’t seem to hold any grudges, even though the Tar Heels sent them packing. They were just happy to see another bird mascot take home the title.

The Peacocks’ run in March was exciting to watch. They’ll try to make it back to the tournament in 2023, but it will be a tall task with head coach Shaheen Holloway and star player Doug Edert on their ways out.