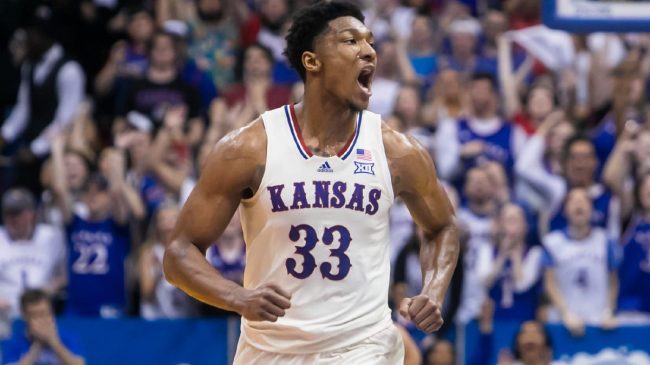 Monday night’s national championship was one for the record books.

The thrilling contest saw North Carolina jump out to a 16-point lead early in the first half before Kansas stormed back in the second half of play. It all culminated with a back-and-forth slugfest for the final minutes of action.

Kansas prevailed, as the Tar Heels missed a game-tying three-point attempt as time expired. The 16-point deficit was the largest the Jayhawks faced all tournament, and it broke a record for the greatest comeback in championship game history.

That wasn’t the only mark that was set in the meeting.

The two teams also combined to notch the most double-doubles in a national title game.

From 2016 to 2021, we did not see a single double-double in a National Championship game.

5 players have a double-double tonight, the most in a title game in NCAA Tournament history. pic.twitter.com/75QvPsLLJP

For North Carolina, Brady Manek, Armando Bacot, and RJ Davis all tallied 10+ points and 10+ rebounds. The same was true for David McCormack and Christian Braun of the Jayhawks.

Bacot’s outing, in particular, was impressive as it capped off a stretch of six straight double-double performances in March Madness. He became the first player to ever record the feat in every single round of the NCAA Tournament.

This championship matchup between two of college basketball’s most historic programs was one for the ages. It should be talked about for years to come, and these records should hold true for some time, too.