A Pair Of Shameful Losing Streaks For The Saints, Cardinals Set Fans Up For Another Awful TNF Game 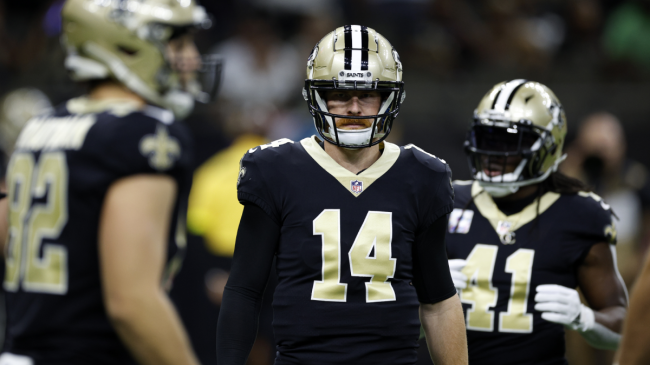 The Saints and Cardinals will face off in what’s setting up to be another uneventful Thursday Night Football matchup. Both sides enter on unique losing streaks, which won’t necessarily excite viewers.

And what’s there to get excited about?

Over the last two weeks, the product on TNF has been disgraceful. There has been a total of two touchdowns scored and just 40 points put on the scoreboard in games involving the Broncos, Colts, Commanders, and Bears. No team has scored more than 12 points during that time.

Now, in come the Saints and Cardinals to save the day. Unfortunately, recent trends don’t bode well for an entertaining outcome.

The Cardinals have lost their last 8 home games while Saints QB Andy Dalton has lost his last 11 road primetime contests.

Andy Dalton is 0-11 in his last 11 road primetime games.
The Cardinals have the longest active home losing streak in the NFL.

Arizona has the longest home losing streak in the NFL at the moment while Dalton hasn’t been able to pull out a primetime win on the road, no matter what team he’s suited up for of late.

Those trends have fans bummed out for what’s expected to be another TNF snoozer. Take a look at what people are saying online.

One fan wrote, “The 0-11 Primetime Andy Dalton is playing the 0-8 at home Cardinals tonight? Epic.” Certainly not the matchup to save Amazon Prime’s TNF season.

The 0-11 Primetime Andy Dalton is playing the 0-8 at home Cardinals tonight?

Maybe we should just expect a tie. Hell, it almost happened in the Broncos-Colts game a couple weeks back. That game ended 12-9 in overtime with neither team reaching the endzone. We’ll see what happens tonight.

One side will end this shameful trend when tonight’s game ends. The other will continue on. No matter the outcome, fans at home just want to see some sort of action following the awful TNF product shown thus far.