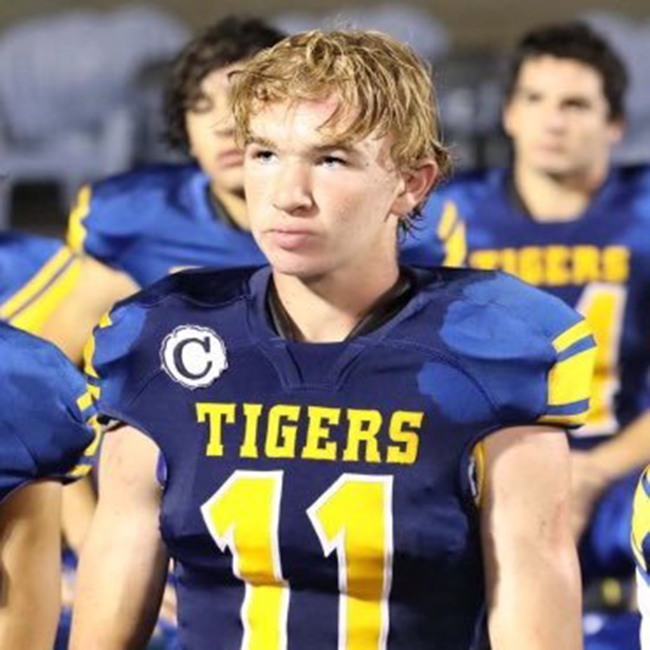 Samuel Brown is a Class of 2023 recruit who is not on the radar of many, if any, FBS college football programs. But he should be.

At 5-foot-11, 175 pounds, he is a little bit undersized, but he has shown the ability to pack on weight and added almost 20 pounds of muscle during his sophomore year. He benches 200 pounds, squats 365 pounds and deadlifts 405 pounds.

Whatever Brown may lack in size, he makes up for in speed and shiftiness.

He makes defenses miss with ever opportunity that he gets and can burn them on deep routes down the sideline.

As a result of his play, he has received All-Southern Arizona and All-Region nods over the course of his three-year career as the top offensive target and top defensive back for the Tigers.

Not only does Brown’s tape back up his talent, but he plays three sports on the varsity level and carries a 4.27 GPA, which speaks to his versatility as an athlete and in the classroom.

Not literally, but Twitter hilariously labels the video as “potentially sensitive content” because it is absolutely nasty. Brown shakes the defender out of his shoes. 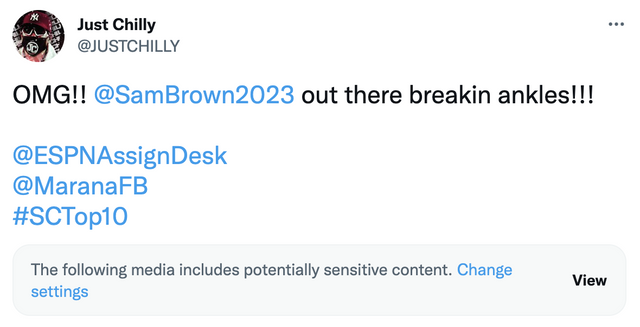 In the video, which former USC quarterback Matt Leinart tweeted out earlier this week, Brown proceeds to straight up embarrass the man coverage. He gets open on a short out route to the numbers and then cuts toward the end zone.

At that point, the defensive back who is man-marking him tails closely behind and tries to take the proper angle of pursuit toward Brown. He does, but it didn’t matter.

Brown shimmy-steps to the sideline, plants his left foot and cuts back to the inside. At that point, the defender completely wobbles and has to catch himself from falling.

But his failed coverage wasn’t over yet. Brown puts him deeper into the spin cycle by cutting back and forth and sending the defensive back to the turf.

Brown then goes on to score while his teammates and those watching lose their minds. It was so gross, take a look:

Based on this video alone, Brown will surely get some more well-deserved looks. While he might not be an SEC-caliber WR1, he could be an extremely valuable asset for a Group of Five or FCS offense. SHAKE EM!!!