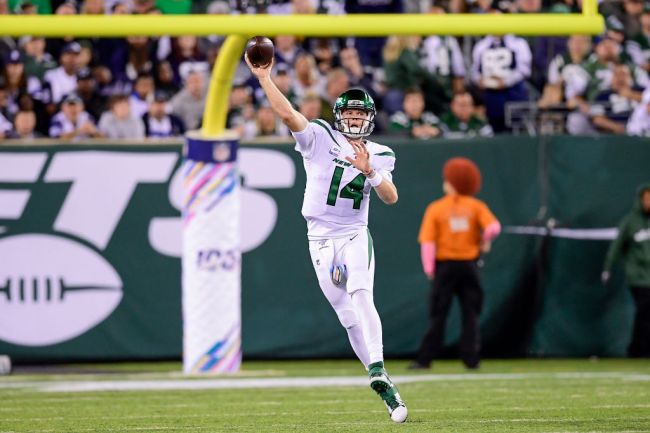 Sam Darnold’s name has been in the middle of trade rumors for quite some time, even before the Jets officially secured the No. 2 overall pick in the 2021 NFL Draft. While Trevor Lawrence is expected to go first overall to the Jaguars, Justin Fields and Zach Wilson will be there for the taking if New York wants to hand the reins over to a new quarterback.

There have also been rumors that the Jets could make a move for Deshaun Watson, who wants out of Houston, and that hypothetical trade would most likely consist of Darnold and a number of draft picks headed the Texans’ way.

Adam Schefter weighed in on the hypotheticals involving Darnold and made it clear that he doesn’t believe the Jets would be able to fetch a Top 10 pick in exchange for the former USC signal-caller.

Back in mid-January following the Jets’ hiring of Robert Saleh as their head coach, Shefter explained that he believes New York will move forward with Darnold under center in 2021.

“I think the plan would be to proceed with Sam Darnold as the quarterback for the New York Jets in 2021,” Schefter said. “I think that Joe Douglas and this staff believe in him — Robert Saleh believes in him, and I think they’d like to give Sam Darnold an opportunity for a full season — when he’s healthy, with a new staff to see what he can do.”

Don’t expect to see the Darnold trade rumors calm down until Watson actually does get dealt from Houston because after all, this is the New York Jets we’re talking about, their fans need to believe in something positive heading their direction. Adam Gase won’t be manning the sideline next season, so Jets fans do have that to look forward to.

Do you think Darnold is worth a Top 10 draft pick? Should the Jets move on from him and draft a quarterback with the second-overall pick? Sound off in the comment section below.