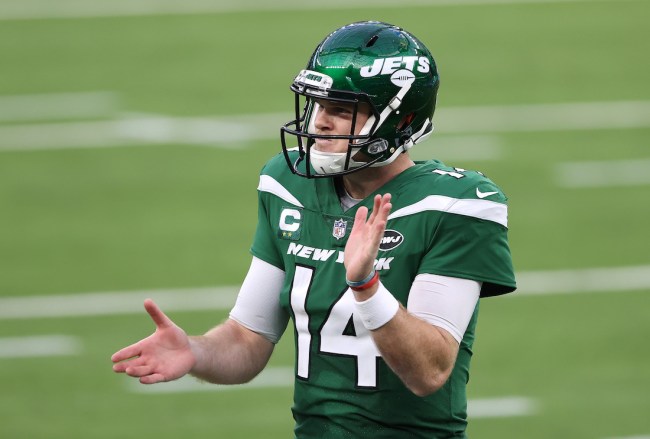 Look, I’m not going to sit here and claim I know a lick more than Jimmy Johnson when it comes to evaluating NFL talent. After all, the current FOX Sports personality was a pretty damn good head coach in his day, not only winning national championships with Miami (FL), but winning a few Super Bowls while leading those star-studded Dallas Cowboys teams in the ’90s.

That said, after hearing Johnson talk to Colin Cowherd on Monday, it has be wondering if the guy’s losing his eyesight or is in denial, because he actually thinks that current New York Jets quarterback Sam Darnold has just as much talent as prospective top-3 NFL Draft pick Justin Fields. Maybe I’m missing something here…

Following the Jets’ lone victory of the season against the L.A. Rams on Sunday, the team has now dropped from the No. 1 slot to the No. 2 slot in the 2021 NFL Draft; should the season end today. That would mean the J-E-T-S would all but miss out on selecting Trevor Lawrence from Clemson, and, presumably, would have to “settle” for Fields from Ohio State instead. But would it be that much of a difference in talent between Fields and Sam Darnold? Not according to Jimmy Johnson.

When talking about the topic, Johnson praised Darnold and blamed his coaching, and actually said the players around the third-year quarterback need to improve. Take a look below at the full conversation.

"I don't know if Justin Fields is that big of an upgrade over Sam Darnold. I still think he's got talent and question how he's been coached the last few years." — @JimmyJohnson pic.twitter.com/Qkad0EvNzC

There’s no denying that the Jets don’t have a ton of talent, which is evident by their 1-13 record. But to suggest that Sam Darnold could be successful with whole sale changes like a new coach and more talent is absurd to hear. Darnold got a former All-Pro running back in Le’Veon Bell and couldn’t kickstart New York’s offense. He also has Peyton Manning’s former offensive coordinator as his head coach in Adam Gase. But Darnold hasn’t done squat to prove he’s worthy of being a starting quarterback, and to hear Jimmy Johnson suggest otherwise is laughable.

As for Fields, who knows what type of player he will be in the NFL? He’s agile, has a strong arm and is tough as nails. A lot of quarterbacks show that in college, then it often depends on the system they go to in the NFL to really determine how great they are as a pro. So is Fields better than Darnold? Maybe. But we won’t know till the dust settles a few years down the road following the 2021 NFL Draft.

Seeing what we have from Darnold thus far in his career shouldn’t make many Jets fans optimistic about him as a player. He continues to make poor decisions and, regardless of coaching or lack of talent, just isn’t executing on the field. That’s on him, and Jimmy Johnson should know that the former USC star probably needs a fresh start to even scratch the surface on becoming the player many thought he’d be when he first entered the league in 2018.