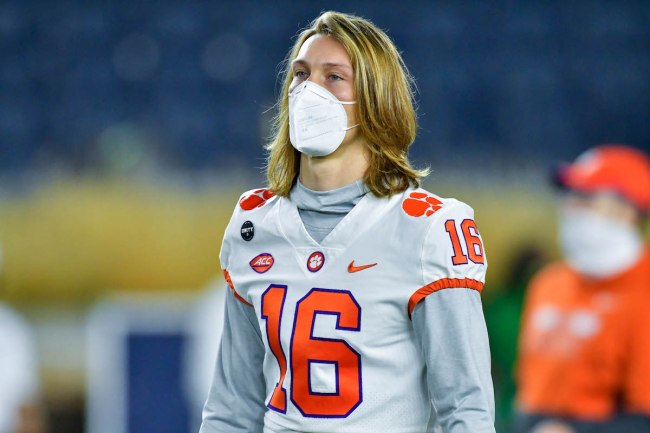 Clemson quarterback Trevor Lawrence is the prized possession for whatever team ends up drafting No. 1 overall in the 2021 NFL Draft. Considering the New York Jets suck and are currently an abysmal 0-13, there’s a really high probability that Lawrence ends up in the Big Apple — which, at this point, just sort of seems like a foregone conclusion no matter how you slice it.

The Jets are an absolute embarrassment, with head coach Adam Gase completely losing his team as the once proud franchise continues to search for its first win of the season. The roster lacks much talent to even build around, so it seems like it’s going to be a while before Gang Green even competes again. It’s a sad state, that’s for damn sure.

But in pro sports in America, losing is rewarded, with the worst teams often getting their choice of the best talent during draft day. Whether fans like it or not, those are the rules — but it isn’t something longtime ESPN reporter Jeremy Schaap necessarily agrees with.

Schaap recently gave his opinion about the idea that losers like the Jets should be rewarded the opportunity to select a player like Trevor Lawrence, and went in on the team and the current system in place. Hell, he even gives examples of leagues in other countries relegating franchises for sucking so much, and delivers a pretty strong statement on the matter.

In American sports, we reward failure. Why? Why should @Trevorlawrence be sacrificed on the altar of competitive balance? Is it good for the game? No. What have the @NYJets done to deserve him? Nothing. My parting shot for @otlonespn: pic.twitter.com/VSII38dOG9

“This is America. We worship at the altar of winning,” Schaap said. “As George C. Scott says playing the title character in the movie Patton while standing in front of a giant flag while addressing his troops: ‘We Americans will not tolerate losing.’ You know who might have some doubts about the sincerity of our intolerance for losing? Of our total focus on winning? I’ll tell you who. Trevor Lawrence. If we really prioritize winning, if winning is all that matters, why do we reward losing? Why would we condemn Lawrence to a future with the New York Jets? Just about everywhere except America, losing in sports is punished. It’s called relegation. If you’re that bad you don’t get the opportunity to acquire the best young players coming into the sport. No, you get bumped down to a lesser league. And if you fail there, you get bumped down again until you hit rock bottom.

Although Jeremy Schaap’s take probably isn’t a popular one, it’s something that every single sports fan has definitely thought about before. Like the reporter asks, what the hell have the New York Jets done to deserve Trevor Lawrence other than losing every game? Absolutely nothing. But the system rewards a franchise for failing, which seems… odd.

Imagine if the Kansas City Chiefs, who currently have the best record in the NFL, had the No. 1 overall pick in the 2021 NFL Draft? That team is loaded with talent, and it’d make for an interesting dilemma when it came to choosing a player or trading the pick away. With Patrick Mahomes locked up for the foreseeable future and playing like an MVP, Lawrence obviously wouldn’t be the pick, so what would the franchise do? If nothing else, it’d potentially open up a world of possibilities and create some wild offseason maneuvers.

Unfortunately, Schaap’s hot take didn’t go over too well with people on Twitter, who ripped the idea that losers shouldn’t be rewarded for being so bad.

You seem to be under the delusion that professional sports leagues are supposed to work like some kind of mythical free enterprise market…pure competition, hooey hooey etc

They don't, not even a little bit.

where was this energy with the bengals last year lol? Or the browns when they were 0-16? Or any team that gets the first pick? This is just incredibly dumb. The draft is meant to better bad teams. What did the bengals do to deserve burrow?

The NFL and all other major sports have done this forever. And for only the 2nd time in franchise history, the Jets are projected to get the 1st pick in a draft. And now we wanna change things up? Countless QBs have gone to Cleveland to rot and no one said a word.

“Isn’t it better for the game..” [to exponentially increase competitive imbalance in the league] pic.twitter.com/Qlv02tbfg3

This is an awful take. The Colts were relevant again because of Peyton. LeBron brought life back to Cleveland. Football was dead in Pittsburgh before 1970 and drafting Bradshaw #1. One of the countless examples of franchises turning around. But yeah, let’s bring back dynasties.

With Trevor Lawrence reportedly thinking about returning to Clemson next season should the Jets snag the top pick in the NFL Draft, maybe this whole conversation is moot anyway. But, assuming the quarterback declares for the draft as expected, the Jets will presumably jump at the opportunity to build around him, and, fair or not, those are the current rules in pro sports.