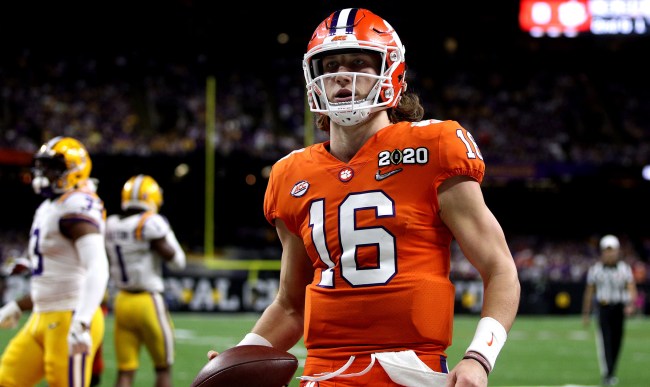 Last week, none other than New York Jets legend Joe Namath said he wouldn’t be surprised if, in a move similar to what John Elway and Eli Manning did when they werre drafted, Trevor Lawrence forced a trade from the Jets if New York drafts him in the 2021 NFL Draft. (Of course that won’t happen because somehow the Patriots will get him, right?)

“It’s happened before, so why would it shock anybody? Namath told ESPN. “Thinking back to the Manning family and Eli Manning and San Diego, there are some people that may not want to go [to a certain team] for whatever reason.”

Then again, with the Jets falling to 0-9 on the season and Lawrence still having another year of college eligibility left, perhaps he wouldn’t even want to have to deal with trying to force a trade from the Jets and will just stay in school.

At least that’s how he made it sound in a recent interview, reports David Hale of ESPN.

When asked about his future NFL plans, Lawrence had this to say.

A few weeks ago, Lawrence appeared to be less interested in turning pro after this season, saying, “Who knows? There’s a lot of things that could happen.”

Naturally, that got fans and media all riled up thinking Lawrence was walking back his previously stated leanings towards coming out for the 2021 NFL Draft.

“My mindset is the same, but I really don’t want to talk about it anymore,” Lawrence said. “People want me to say no matter what, for sure I’m leaving school, and that’s just not something I’m going to say. That’s as simple as it is. I’m never going to corner myself like that, but that’s what people want to hear. I want to leave myself opportunities to take everything in and make a decision and obviously I’m not going to say that for sure I’m staying or for sure I’m leaving, and it turns out that caused more of a commotion than if I hadn’t said anything.”

Regardless of what happens, Clemson Tigers fans will be glad to hear that Lawrence is feeling better after contracting COVID-19 and expects to return to practice this week as the Tigers have no game scheduled for Saturday.