Keyshawn Johnson Suggests Patriots Will Be Gifted The No. 1 Pick In Order To Select Trevor Lawrence 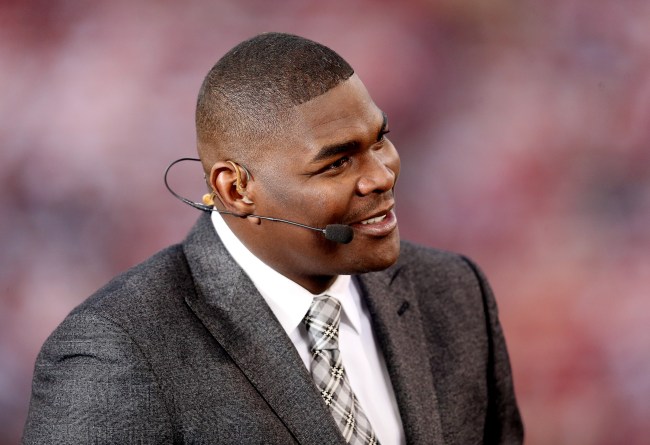 If you missed Keyshawn Johnson this morning on Keyshawn, JWill & Zubin, it’s more than understandable. After all, it’s been one helluva ride for Americans over the past 24 hours, with everyone pretty much face down into this whole election thing that’s taking place — which, you know, is just sort of a big deal. So hearing a sports analyst’s take about the NFL Draft probably wasn’t a high priority for many people on Wednesday morning.

That said, whoa, did you miss quite the hot take from Johnson, who passionately argued with co-host Jay Williams about some of the young quarterbacks in the NFL like Sam Darnold (Jets), Daniel Jones (Giants) and Tua Tagovailoa (Dolphins). It only ended up getting pretty heated from there.

What started as a debate about the Jets, Giants and Dolphins possibly choosing Trevor Lawrence should one of those teams get the No. 1 overall pick in the NFL Draft to replace their incumbent signal-callers, turned into Keyshawn Johnson stepping way outside the realm of probability, with the former wide receiver saying the Patriots will somehow end up with the top pick to select the Clemson quarterback. Even crazier? Johnson suggested it’d be the Jets who would gift wrap the top pick to their divisional rival. Just take a look below at what Key had to say.

“Sam Darnold’s not going anywhere. What they’re going to do with that No. 1 overall pick is they’re going to move it for somebody else, and if somebody else wants him like the New England Patriots for instance, take him. Give us your next 10 drafts No. 1 picks. If you believe that he’s the next guy, then take him.”

“STOP!…Sam Darnold isn’t going anywhere!”@keyshawn thinks that teams like the Jets, Giants & Dolphins need to slow down on moving on from their young QB’s. #KJZ pic.twitter.com/FRX3iPRAkh

Is this a possibility? Obviously, because, if there’s one thing that the year 2020 has taught us, it’s that anything is certainly possible. Is it probable, though? Well… that’s a whole different conversation, because it seems highly unlikely that the New York Jets — who have gotten stomped and trolled by the Patriots in the AFC East for the past 20 years — would be willing to do anything to help a divisional rival get better. I mean, Lawrence could become the next Tom Brady.

Even as Keyshawn Johnson floats the idea of New England sending the Jets their first-round pick for the next decade, the thought of these two teams doing a deal for the top pick in the 2020 NFL Draft seems highly unlikely — especially when considering how pitiful Sam Darnold and the Jets have looked so far this season. Kudos to making such a bold claim, but, sorry, it probably isn’t going to happen.