Trevor Lawrence Is Not Going To Stay At Clemson, Relax 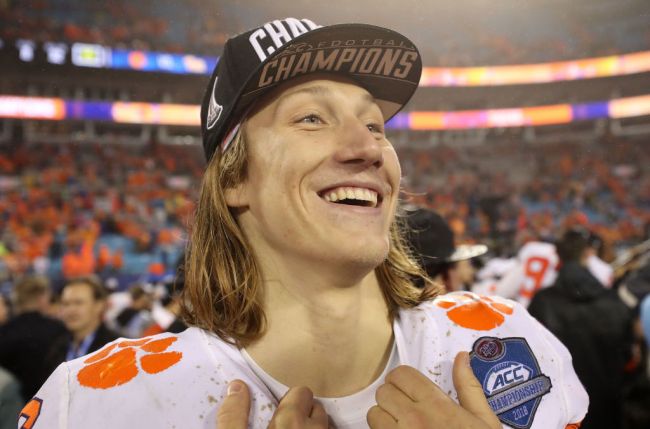 Clemson signal-caller Trevor Lawrence is projected to be the No. 1 overall pick in the 2021 NFL Draft by every single person that watches college football and has a brain. The 6-foot-6, 220-pound junior was one of the best quarterback prospects of all time as a five-star recruit and remains one of the best quarterback prospects as he comes to the end of his three required years of collegiate play. Lawrence has amassed 8,778 yards and 83 touchdowns with just 14 interceptions (only two came in 2019) through the air in his first 36 games in South Carolina and added 811 yards and 14 touchdowns on 192 rushing attempts. He’s big, he’s fast, he has a rocket arm… he’s pretty much the perfect quarterback.

Even my 84-year-old grandma knows his name, so I assume that you do too, but here are his highlights from last season in the case that you live under a rock:

There are few things that Lawrence cannot do and, barring an unforeseen injury (God forbid), he will hear his name called first in April. Unless he choses to return for his senior year with the Tigers, that is. When asked in a press conference on Tuesday if there is anything that may prompt him to finishing out his collegiate career, he replied exactly how he should.

“I don’t know, I mean we’ll just have to see how things unfold,” Lawrence said. “I think there’s a lot of factors in that. Honestly just playing this year, putting everything I have into it. Not really focusing on next year, whether I leave or stay or whatever. Obviously I have the option to do either one.”

He went on to elaborate on the topic and the media began to run with headlines that Lawrence might be showing hesitation on turning pro.

“Kind of my mindset has been that I’m gonna move on, but who knows,” he said. “There’s a lot of things that could happen. So just really focused on this year and not trying to look ahead. Not trying to worry about that. Obviously I can’t control it and really just trusting that God has a plan for me, no matter where that is. No matter where I go, whether it’s across the country, whether it’s close to home, whether I stay another year. No matter what it is we’ll work it out. So I’m not sure, that’s a tough one. But we’ll see how it all unfolds.”

Come back to earth, people. This is the classic choreographed answer that every college prospect has said since the beginning of time. What was he supposed to say? If he said that his mind was made up, he would get bashed for giving up on his team or worrying about next year instead of the game in front of him. If he chose not to answer, the question would be asked on an endless loop. Of course he is going to say that “we’ll just have to see how things unfold.”

If the season were to end today, the winless New York Jets would hold the rights to the No. 1 overall pick, and thus Lawrence. While former Gang Green quarterback Mark Sanchez said recently that Lawrence is on a better team now than he would be in East Rutherford, it really doesn’t matter. Whether he ends up with the Jets, the Giants, the Jaguars, the Falcons, the Dolphins or the Chiefs, he is going to play in the NFL next season.

Heisman Trophy and National Championship winning quarterback (two things that Lawrence could be come next spring) Joe Burrow was drafted No. 1 overall in 2020 and signed a four-year, $36.2 million guaranteed deal with the Bengals in late July. Do people really think that Lawrence is going to forgo a contract that is expected to be north of $40 million to risk injury at Clemson for free?

Even if he refuses to play for the Jets, which is fair because I don’t know who would, he will turn pro a la Eli Manning, who refused to play for the Chargers and forced a trade on draft night. Lawrence doesn’t seem like someone who wouldn’t play where he is drafted, but if it’s either that or return to school, there is no way that he chooses the latter. Come on, people.