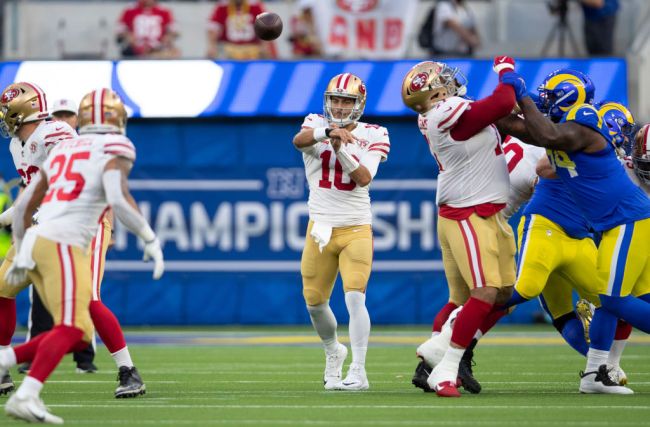 The reports coming out of San Francisco on Jimmy Garoppolo have been all over the place lately.

First, the San Francisco 49ers are moving on to Trey Lance and would have already dealt Jimmy Garoppolo if it weren’t for his shoulder injury. Shortly after that, the 49ers reinforced the idea that they were moving on from Jimmy G by putting him as the 4th QB on their depth chart.

Last week, 49ers Jed York took a different approach to the Garoppolo discussion. He claimed that the 49ers would be happy to keep their former starting quarterback.

Now, the story has changed again. 49ers GM John Lynch spoke to KNBR’s Tom Tolbert today and seemed to indicate that we may be close to the time for the 49ers to just release Garoppolo rather than continuing to seek a trade.

John Lynch had a long answer when Tom Tolbert asked him on KNBR what the timeline looks like for when the 49ers would release Jimmy Garoppolo if there's no trade. However, his first words were, "Yeah, you know I think we're getting pretty close."

While having to just release Garoppolo isn’t a great scenario for the 49ers, it’s as good as things can get for Jimmy G right now.

The 49ers haven’t been able to generate trade interest in him and there really aren’t many teams that have reasons to want to trade for him. However, if he hits the free agent market, the Seahawks suddenly become a viable landing spot. The Browns could bring him in more cheaply to start while Deshaun Watson is suspended.

He could even find a team whose quarterback is injured or underperforms after the first couple of weeks of the season.

At this point, Garoppolo just has to be hoping the 49ers hurry up and release him already.