Saquon Barkley Looks Healthy, Thicker Than Ever, And Explosive In First Look At Giants OTAs In 2022 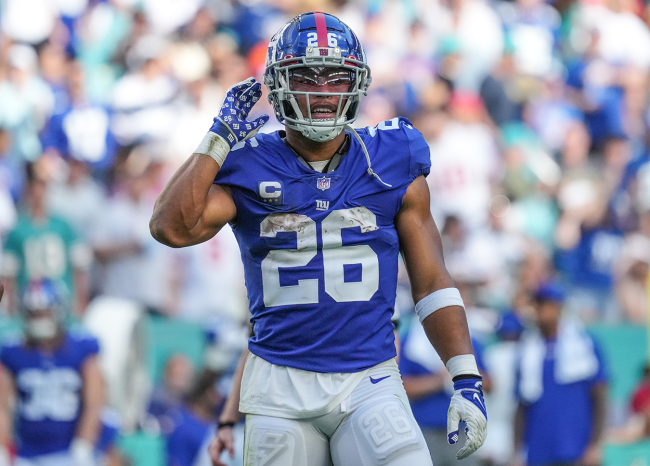 Saquon Barkley’s first four years with the Giants has been very up and down. The No. 2 overall pick in the 2018 NFL Draft was named Offensive Rookie of the Year, averages more than four yards per carry and shows flashes of a Hall of Fame career.

But he hasn’t been able to stay healthy.

While bursting onto the scene with 1,307 rushing yards and 11 touchdowns in his first season, Barkley also set a record for most receptions by a rookie running back in a single season with 91. He was New York’s entire offense.

After a successful rookie year, Barkley missed four weeks in year two with a high ankle sprain but still crossed the 1,000-yard mark on the season. 2020 did not go as well. The former Penn State star tore his ACL in Week 2, and missed the rest of the season.

Come 2021, Barkley was fully recovered from his ACL tear and was eager to rewrite the injury-prone narrative. That did not happen, as he was hampered by another ankle injury last season, missed four games and did not even eclipse the 600-yard mark.

Now, entering his fifth year in the league, Barkley wants to return to form. He had an entire offseason to get back to full health and appears to be in great shape.

Barkley arrived for the first day of OTAs with the Giants on Monday.

In the first images from Giants camp, Saquon Barkley looks as big and strong (also: thicc) as ever.

On Tuesday evening, the team posted the first live-action look at Barkley in 2022. Although it was just one look at one rep from one drill, he looked explosive and was able to cut off of both legs— something that he struggled with after hurting his ankle las year.

If Barkley can stay healthy this fall, the Giants are hoping that this is the year their luck starts to turn with a new head coach and a young offense ready to blossom.