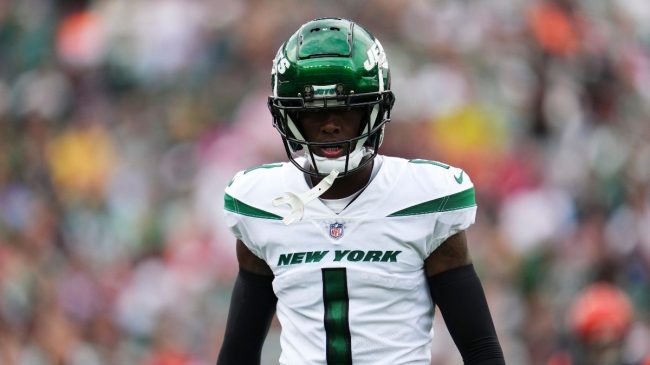 New York Jets cornerback Sauce Gardner — who crowned an excellent rookie season with a Defensive Rookie of the Year nomination on Wednesday — has become the latest NFL player to take a shot at Bengals corner Eli Apple.

Just hours after Buffalo Bills defensive end Shaq Lawson threatened to fight Apple for disrespecting Damar Hamlin, Gardner chimed in to crown Apple as the “Patrick Beverley of the NFL”, which certainly wasn’t meant as a compliment given Beverley’s reputation in the NBA.

Eli Apple is the Patrick Beverly of the NFL😂

Following the Cincinnati Bengals AFC Divisional Round victory over the Buffalo Bills, Apple — as he so often does — has been chirping at Bills players, such as Stefon Diggs and Josh Allen, on Twitter.

Diggs — who also took to Twitter to try and defend his outburst as Allen during the 27-10 loss on Sunday — replied to Apple’s tweet by calling him corny and claiming he’s “clout chasing”:

Lawson, however, took particular offense to Apple’s tweet as he — along with many others on social media — felt the outspoken defender was taking a shot at Damar Hamlin by using the #3 in his tweet with the heart hands emoji that Hamlin often uses.

“You played a good game but @EliApple disrespect my boy @HamlinIsland’s situation that s**t get you beat up frfr. Keep it on the field,” Lawson tweeted in response to Apple’s trolling.

Following their win over the Bills, Apple and the Bengals will head to Kansas City for Sunday’s AFC Championship game against the Chiefs, which will be a rematch of last season’s AFC title game that saw Burrow and co. advance to the franchise’s first Super Bowl since 1988.