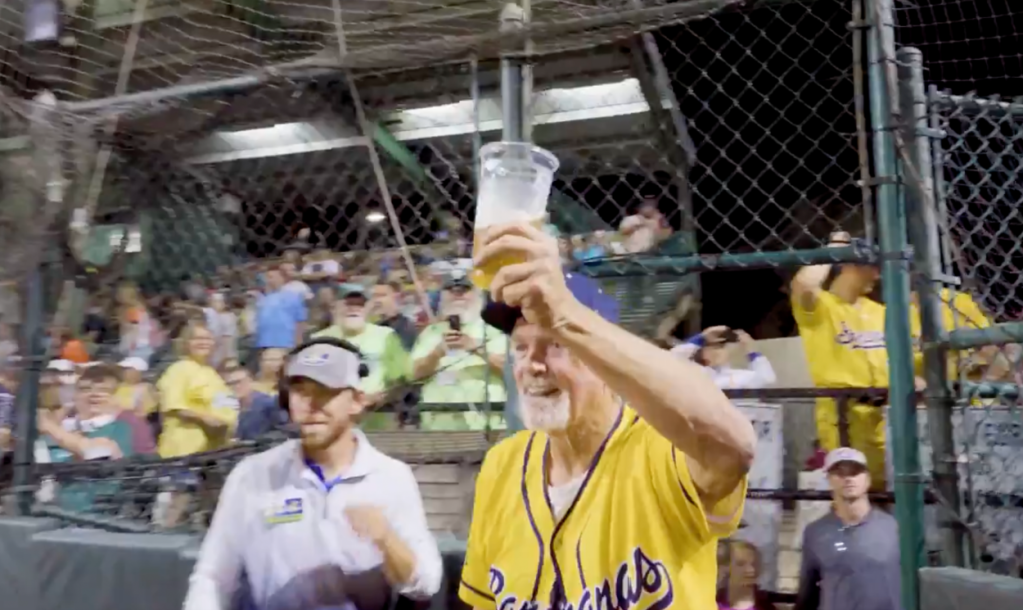 Former Red Sox pitcher Bill Lee was a force to be reckoned with in his heyday. The former MLB All-Star was elected to the Boston Red Sox Hall of Fame after pitching for the team between 1969-78 and finishing his MLB career with a 119–90 (3.62 ERA) record. He’s now 75-years-old and striking out batters for the Savannah Bananas.

I don’t know if you guys have heard, but the Savannah Bananas are killing it with promos lately. Earlier this week (video below) they introduced a new rule where a fan in the stands caught a foul ball that counted as an actual out in the game. Now they’re back with this Bill Lee story.

The Savannah Bananas brought out Bill Lee to throw some pitches and the former left-handed pitcher for the Red Sox was able to actually record a strikeout against an MiLB batter. It took some finessing with Bill Lee throwing the strikeout pitch at an incredibly high arc but it worked. And it’s spectacular. So let’s check it out…

75-year-old Red Sox Hall of Famer, Bill Lee, came down from the stands with a beer in hand and then proceeded to strike somebody out. Power move. pic.twitter.com/BTNsoepjuU

I mentioned above the Savannah Bananas recently debuted a game-changing rule. That clip went viral and honestly, it’s a rule that should be introduced across all MiLB games. The rule is called Banana Ball Rule #9 and a video on the team’s official Twitter has now been viewed over 1.5 million times.

Banana Ball Rule #9: If a fan catches a foul ball, it’s an out

Why not let the fans get in on the action too?

Tonight the Bananas (and the stands) made history by a fan catching a foul ball for an out!

Banana Ball Rule #9: If a fan catches a foul ball, it's an out. pic.twitter.com/JWo7kZCEpZ

I repeat, the Savannah Bananas are straight-up killing it lately. Minor League baseball outperforms every sport on the planet with awesome promos but the Bananas have emerged as the best of the best in recent days.

That clip of 75-year-old Bill Lee striking out a batter brought back some memories for some fans, and had others celebrating how great the game of baseball is.

Oh my! Used to be in bleachers chatting with Bill and Dennis so many times as everyone was holding joints out to them. GREAT GUYS and awesome personalities full of wit. $1 bleacher seats back then!
$3 parking

The lightning strike after the first pitch is just 🤌

This is great stuff! Bill Lee still has it. And drinking beer 🍺. Remembering when he threw the eephus pitch to Tony Perez in the 1975 World Series. Tony took him yard. Bill Lee- The Spaceman- interesting person indeed.

If you didn’t catch that lightning bolt the first time you watched the video then go back and watch it again. The timing of that lightning strike really makes the clip.