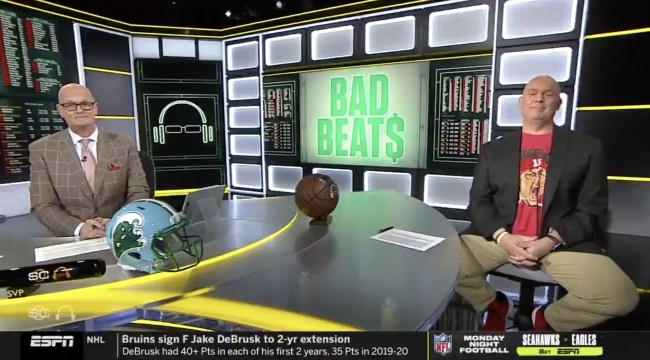 Scott Van Pelt is the undisputed king of sports television. There are plenty of other broadcasters and analysts who do a great job, like Gus Johnson and Jim Nantz to name a few, but no one brings pure entertainment value like SVP. He joins up with Stanford Steve every night to host the final SportsCenter of the evening and never fail to find the perfect balance of humor, emotion and sincerity. One of the best segments of the show comes when the two break down the worst “bad beats” from the week. A bad beat, for those unaware, is a term used in sports betting to mark a losing bet in the final moments of a game.

Monday’s segment featured one of the most wild beats to ever occur. The University of Virginia was favored by 39.5 points against Abilene Christian University on Saturday. The Hoos were winning by 42 points with 1:30 remaining in the game, and what transpired was truly unbelievable. After the Wildcats scored and covered the spread, the home team took over backed up to its own goal line and only had to take a knee to expire the clock. Instead, it called a ludicrous double pass trick play that resulted in a safety. And it didn’t stop there.

Quarterback Lindell Stone, wearing No. 36, took the snap and threw back to his quarterback counterpart Keytaon Thompson, wearing No. 99. As if it couldn’t get any weirder, he throws back to Stone and the Abilene Christian defense swarms him in the end zone for a safety. The two-point play further solidified the cover for the Wildcats and gave them the ball back. What transpired was truly unbelievable. A pick-six by the Cavaliers swung the point-spread in their favor, resulting in an ultimate bad beat for those who took the visitors at +39.5.

Stanford Steve’s call makes it even better, telling No. 67 to get on his horse. “THE HORSE IS ON HIM,” Van Pelt responds.

The entire sequence becomes even more ridiculous when the reason behind Virginia’s trick play in its own end zone was explained after the game.

Apparently, instead of holding up a “V” signal with their arms, the offensive staff continues to calls its victory formation off of a play sheet. Offensive coordinator Robert Anae was off a line on his sheet and called the double pass instead of running out the clock.

“It’s a complete accident… It shows you what being off one line can do, maybe in your life, but also in a football game, where you can go from running out a clock to a double pass out of your own end zone,” head coach Bronco Mendenhall said after the game.