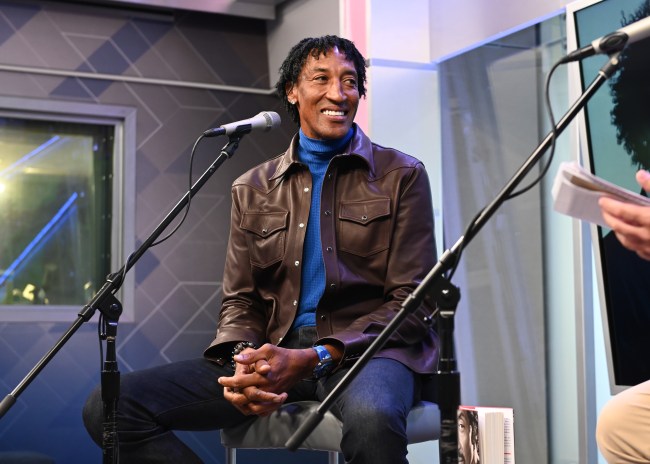 Scottie Pippen needs to find himself a hobby. He should learn to cook, or knit, or garden. Maybe he should try fishing. Whatever it is, he needs to find literally anything that is going to keep him busy enough to stop making ridiculous statements in the media.

He has recently been on a tirade, releasing a statement seemingly every day that nobody but the GOAT’s most delusional haters agree with. This time around, he made things even worse by dragging the late Kobe Bryant into it. Here’s the latest ridiculous quote from Pippen’s interview with GQ:

“The one teammate that I wish I could’ve played with and I didn’t play with was Kobe Bryant,” said Pippen during his GQ interview. However, he also revealed that Bryant often came to him to better his game. He stated, “Kobe really idolized the way I played the game, the way that I defended, and you know, a lot of it, he started to call me after I retired and to ask questions about different situations.”

“How you would guard certain people? What kind of footwork would you do this? What would you do in this situation? Just picking your brain to enhance his ability out on the basketball court. You know, he was a great student of the game, and you know, he would ask me questions about how would I guard Michael in this situation, this and that. And just, you know, just trying to improve his craft.”

Does Scottie Pippen think that nobody ever watched Kobe play the game? That’s the only way anybody would ever believe that Kobe idolized him. Everything about the way Kobe played screamed “my game is modeled after Michael”. You can’t see very much Pippen in his game.

This is just another disappointing quote from a man who was an all-time NBA great in his own right. I get that he’s upset with the way he was portrayed in “The Last Dance” but attacking “His Airness” isn’t going to do anything but make his image worse.

I hope Pippen can find peace after his book is released because I would much rather remember him as one of the NBA’s 50 greatest players ever than as the guy who’s salty about Michael Jordan winning him 6 rings.