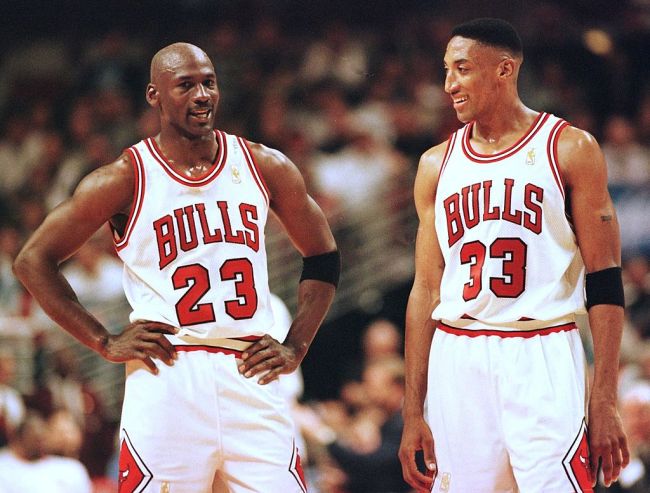 Michael Jordan, who is known for being a notorious gambler, has been accused of cheating on bets over the years. During a recent interview on the Dan Le Batard show, former Chicago Bulls legend Scottie Pippen confirmed that Jordan was a cheater.

Earlier this week Pippen told Le Batard that he knew that Jordan cheated on bets when the two were teammates.

“I will say that he cheated on a few of his bets,”

During the show Pippen was asked about the infamous story about how Jordan would cheat his teammates by bribing baggage handlers when they would gamble on who’s luggage would get pulled out first by airport staff during game flights. Scottie says he couldn’t confirm whether or not Jordan was cheating in that instance but he did probably have an advantage because of his unique-looking bags.

“Michael Jordan had his own beautiful bags,” “At this time, we didn’t have team bags, so when you saw a bag come off and it had a Jumpman on it, I’m sure for the guys working at the airport, that was the first bag they grabbed. So he had an advantage, but I don’t think it was something he intentionally did. It was just a knowing thing that he knew people were going to jump on his bag.”

Pippen was not asked whether he had heard about the wild story of MJ ripping him off when they would bet on the prerecorded animated bull races before games.

According to ESPN’s Amin Elhassan, Jordan one day found out that the animated bull races the Bulls showed on their Jumbotron were prerecorded. So he started asking the Bulls’ operations staff before each game, which color bull would win the race that night. They would tell him and then Jordan would use this information to trick his teammate Scottie Pippen into a bet.

So whenever the Jumbotron race would occur during a timeout, Jordan would bet Pippen a hundred dollars that he could name the winner. Unaware that Jordan had insider information on the race, Pippen would agree to the bet and then instantly lose. According to Elhassan, Jordan did this for basically an entire season and Pippen just kept agreeing, losing a hundred dollars to his teammate at every home game.