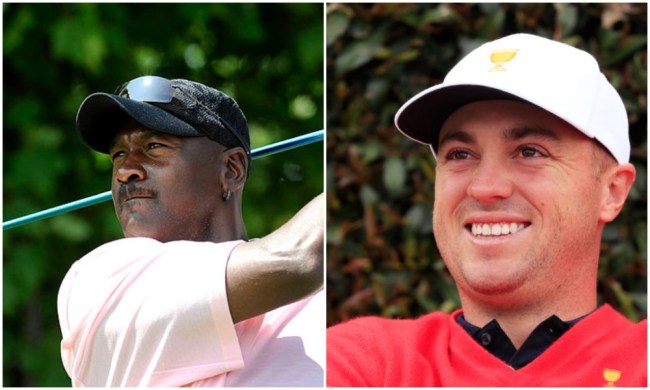 Tiger Woods and Justin Thomas teamed up to take on Justin Rose and Rory McIlroy in the Payne’s Valley Cup on Tuesday, an event to celebrate the opening of Woods’ first public course design, Payne’s Valley Golf Course.

While it would have been easy to see an exhibition match taking place 48 hours after the U.S. Open be underwhelming, Thomas brought the heat right out of the gates.

With all four players mic’d up, Woods had honors on the first tee and pulled his tee shot well left, out of play. Walking down the fairway, all four players were having a bit of a laugh about the shot, and then out of nowhere, Thomas took a jab at Michael Jordan accusing him as a cheat on the course.

“It would be like playing with MJ [if we found that tee shot], ‘I got it, it’s right here. Oh, Tiger, it kicked out into the fairway.'” Tiger replied to the comment with a “love it.”

Walking down the first fairway, JT has already exposed Michael Jordan of being a cheater on the course😂 pic.twitter.com/LQvbuGAYYK

It’s well known that MJ is straight-up addicted to the game of golf, we saw plenty of examples of that during ‘The Last Dance’ and it’s safe to assume that he doesn’t appreciate JT’s jab about some of his, let’s say habits on the golf course.

Related: Michael Jordan Details His Very Intense Gambling Habits On The Golf Course And The Time He Skipped A Visit To The White House To Go Play