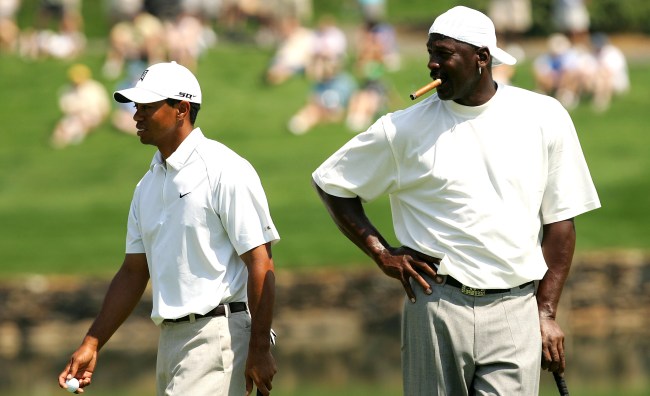 ‘The Last Dance’ has delivered some incredible insight in terms of Michael Jordan and the ’98 Bulls on the court, but the documentary has also given us a great behind-the-scenes look into MJ’s life on the golf course as well.

It’s no secret that Jordan loves the game of golf, you could probably even say he’s addicted to the game. Charles Barkley’s story about MJ playing 36 holes ahead of a 1992 Olympic qualifying game says it all, really.

The fact that he likes to gambles on the course is well known too and Jordan discussed that topic during the sixth episode of ‘The Last Dance.’

Reported David Aldridge brought up a story about Jordan skipping a trip to the White House following Chicago’s 1991 title. Aldridge explained that Jordan made up the excuse of ‘oh, time with family,’ but that wasn’t the case, Jordan ‘was out gambling with Slim Bouler.’

Bouler was a well-known golf hustler and big-time gambler that was eventually convicted on charges pertaining to money laundering. According to GOLF, Bouler was also investigated for cocaine trafficking and during said investigation authorities found a $57,000 check from Jordan at Bouler’s home. Jordan initially said it was a loan, but his story in court was much different.

“It was what I lost gambling,” Jordan testified. “It was never a loan, I said it was a loan strictly to avoid embarrassment and pain.”

Jordan addressed the overall scope of his golf gambling habits explaining that he ‘didn’t do anything wrong.’

“And if they wanna gamble, we gamble. The character of those individuals, I find out later what kind of people I was playing with, I learned that lesson. But the act of gambling, I didn’t do anything wrong.”

As for other forms of gambling, MJ explained that he never bet on basketball games because he only bet on himself, so golf fell into that category.

Former NBA commissioner David Stern knew about Jordan’s gambling habits as well, but he never believed it got out of hand.

“Michael was betting on his golf game, larger numbers than you and I might bet if we we played golf together, but given Michael’s earnings and the like, it never reached epic crisis levels in my view,” Stern said.

Losing $57,000 on the golf course for most people would make a rather large dent, but as Stern stated, this is Michael Jordan we’re talking about here.

Jordan once turned down a two-hour appearance with a $100 million fee, it’s safe to say that Jordan didn’t flinch when writing that $57,000 check.