Scottie Pippen Explained Why He Wasn’t In ‘Space Jam’ With Michael Jordan, What He Thinks Of LeBron Making ‘Space Jam 2’ 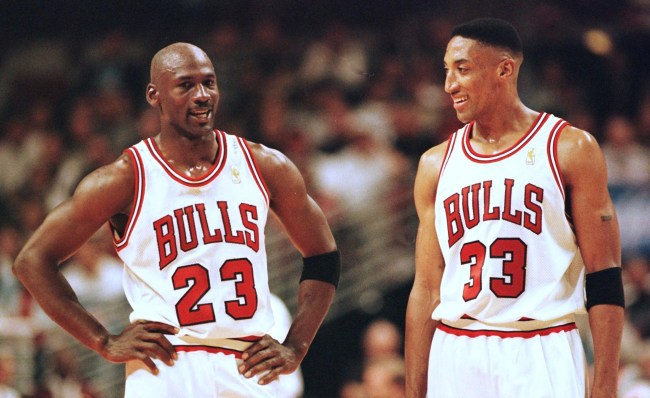 Back on November 15, 1996, Warner Bros. released probably the most famous basketball movie ever made: Space Jam starring The G.O.A.T. Michael Jordan.

Appearing with MJ in the supporting cast of the film were several other NBA stars including Larry Bird, Charles Barkley, Patrick Ewing, Larry Johnson, Muggsy Bogues, and Shawn Bradley.

So, with that many NBA players and coaches appearing in the movie, many fans have wondered why his Chicago Bulls running buddy in winning six NBA titles, and future Hall of Famer, Scottie Pippen wasn’t also in Space Jam, at the very least in a cameo of some sort.

Well, it took 23 years (coincidence?!), but Scottie Pippen finally explained why he didn’t appear in the movie.

“I think I was injured or recovering from offseason injuries,” Pippen told TMZ Sports. “I wasn’t able to participate.”

“But you would have been front and center…?” he was asked, before jumping in, “Oh yeah. For sure,” Pippen said with a giant grin.

He also said that the upcoming Space Jam 2 starring LeBron James and the new batch of NBA stars doesn’t have to live up to the original film.

“I don’t think it has anything to live up to. It just has to be a great piece,” he said. “I think just re-living it and it will be great to see it put back together for a new generation.”

Watch his entire interview below…