Golf Fans Sense Tension Between No. 1 And 2 Players As Scottie Scheffler Walks Through Cam Smith’s Sightline While Lining Up Putt 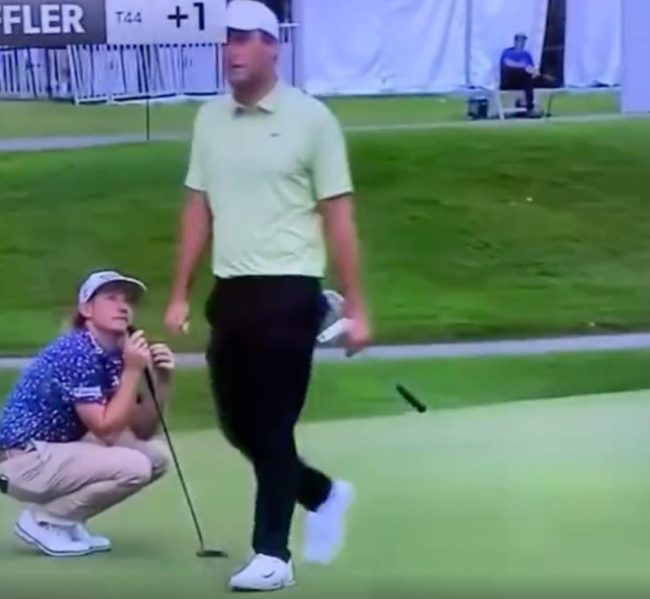 There appears to be some tension on the course as the PGA FedEx Playoffs kick off. The top two players in the world were seen in an interesting interaction during Thursday morning action.

The storyline this season has been the rivalry between the PGA and upstart LIV Golf. LIV has successfully snatched a number of notable golfers throughout the year, luring players away with the offers of more golfer-friendly schedules, and of course, money.

LIV has been able to nab players like Brooks Koepka, Dustin Johnson, and Bryson Dechambeau, signing some of the top PGA talents to deals worth over $100 million.

It seems the league has landed their next highly rated player. Rumors have surfaced saying No. 2 ranked Cameron Smith will defect to LIV after the FedEx Playoffs wrap up, which No. 1 ranked player Scottie Scheffler might take some offense to.

Fans believe he put his frustration on display Thursday with a sneaky, sly jab.

Scottie Scheffler was seen walking directly through Cam Smith’s sightline at the FedEx Cup as he knelt down to evaluate a putt. Typically, one would show respect by walking behind their opponent as they eyed their next shot.

That wasn’t the case Thursday, and Smith didn’t look happy about it.

It’s possible that Scheffler is peeved about Smith’s leaving the Tour for LIV Golf. He’s been adamant in his defense of the PGA this season.

Or maybe it was an accident.

Fans online have been quick to react, and they seem to be split on the opinion.

Some have been quick to say the action was intentional.

Love love love it. What we need

Others say the opposite, using a clip of Scheffler and Smith high fiving after the Aussie landed an impressive eagle.