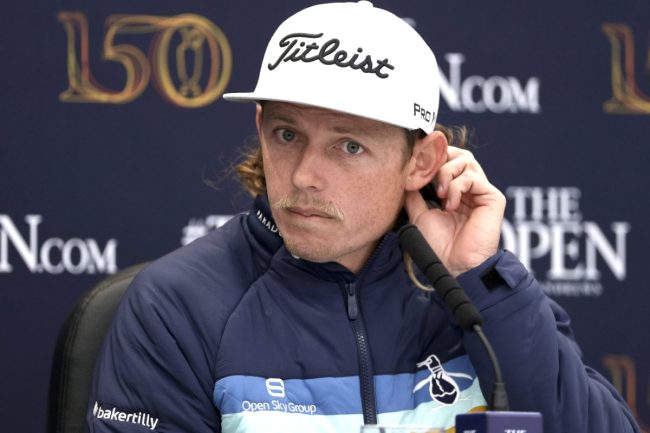 Cam Smith was asked the tough questions in his Thursday press conference ahead of the PGA FedEx Playoffs, but his (non) response about his LIV future has the golf world peeved.

The Aussie golfer is reported to have already signed with the LIV Golf League, meaning this could be his last appearance in a PGA event for some time. The deal is said to be worth $100 million, which would almost quadruple the total winnings for his professional career thus far.

It’s hard to blame the golfer for leaving, but with the money coming from the controversial Saudi-backed league, many have been critical.

So, he had to know the questions would come after reports broke Tuesday afternoon. Unfortunately, his response wasn’t enough for golf fans on social media.

Despite the reports, Cam Smith would not admit to having signed with LIV Golf in his response. He deflected the question quickly, saying that he’d rather focus on the task at hand.

“My goal here is to win the FedEx Cup playoffs. That’s all I’m here for. I have no comment on that.”

That, unsurprisingly, led to an uproar on Twitter. Many called the golfer a coward for not admitting that he’s chasing the money.

Pretty cowardly. Own your decision.

Dude is a great golfer, but after that, there isn't much in there…

If LIV is such a great thing, why not be excited & announce it? Be proud of it. Be bold. But what do we get? BS lame “no comment”. Own it dude. And all those who left should own the consequences.

What an absolute coward.

Others had Smith’s back, saying that he didn’t owe anyone an answer. He is here for the FedEx Cup, and that’s his focus at the moment.

We’ll see how Smith does in what could be his last PGA Tour event. I imagine the reaction would quite loud if he wins the FedEx Cup only to leave shortly thereafter.