How Scottie Scheffler Uses His Masters Green Jacket To Get Out Of Doing House Chores, Mess With His Wife 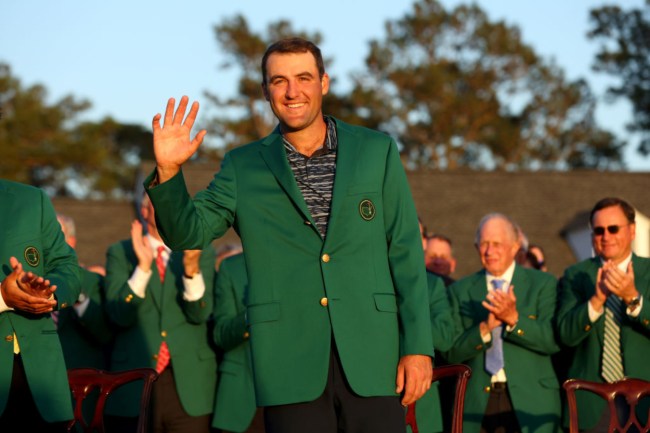 In 86 editions of the Masters, only 55 different men have been fortunate enough to put on the green jacket. Scottie Scheffler became No. 55 last week with his dominant performance at Augusta National as his name was vaulted into the list of golf’s historic wins.

Winning a green jacket changes your life in many ways, but it’s also a built-in excuse to get out of doing household chores, at least it is for Scheffler.

Scheffler is taking full advantage of being a Masters champ around the house.

The 25-year-old joked to Golf Digest that he keeps the green jacket close by when he needs to get out of doing something his wife asks him to do.

“I’ve just put it on a few times around the house when trying to mess with Meredith,” Scheffler said of his wife. “When she tries to get me to clean the dishes or something like that, I’ll put the jacket on and be like, ‘Really, I still have to do this?’ I’ve had some fun with her with that.”

It’s safe to say Scheffler owes his wife a few dish cleaning efforts after she played an important role in his quest to win the 2022 Masters.

After his win, Scheffler explained that he had a tough Sunday morning, but Meredith was there to calm him down and say all the things he needed to hear in that moment.

“I cried like a baby this morning,” Scheffler explained. “I was so stressed out. I didn’t know what to do. I was sitting there telling Meredith, ‘I don’t think I’m ready for this. I’m not ready, I don’t feel like I’m ready for this kind of stuff.’ I just felt overwhelmed.

“She told me, ‘Who are you to say that you are not ready?’ What we talked about is that God is in control and that the Lord is leading me; and if today is my time, it’s my time.”

It’s tough not to like Scottie Scheffler; a guy just trying to get out of cleaning the dishes like the rest of us.