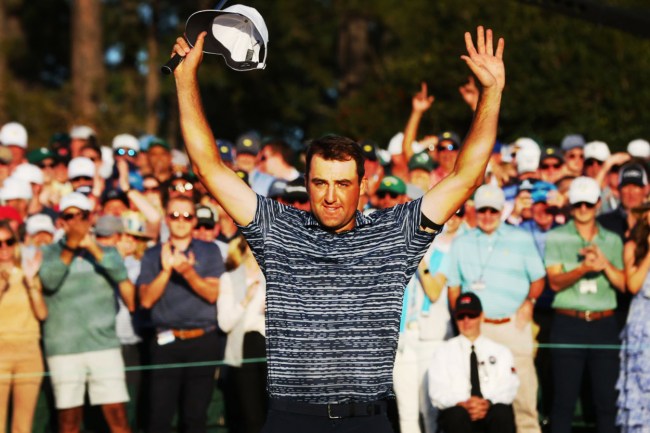 Scottie Scheffler entered Masters week as the hottest golfer on the planet. He left Augusta National on Sunday evening with that same title, $2.7 million richer, and the owner of a brand new green jacket.

The 25-year-old blitzed the field en route to his first major championship, winning by three shots at 10-under par. That 10-under par could have been at least two strokes better, as well, if he didn’t four-putt the 18th green on Sunday.

Scheffler turned to caddie Tedd Scott and laughed as he missed his third putt on the 72nd hole on Sunday. Sure, it helped that he could have six-putted the final green and still avoided a playoff, but Scheffler smiling and laughing his way to a double-bogey to close out his Masters victory perfectly summarizes both his week and him as a player.

Scheffler walked the grounds of Augusta National with the same demeanor and under the radar confidence as he would any local public course. He doesn’t have the prettiest swing in golf, you could even use the word ‘ugly’ to describe some of his swings off the tee this week, but that’s exactly what makes Scottie Scheffler, Scottie Scheffler.

He, like every other great golfer of both the past and present, doesn’t play golf swing, he plays golf, and wow did he play golf at Augusta National this week.

It’s Scheffler’s ‘normal guy’ demeanor, along with his elite ability to get the ball in the hole, that makes him so likable. You’d be tough-pressed to find someone who won’t tip their cap to the way Scheffler got the job done at the 2022 Masters.

Top Takeaways From The 2022 Masters

All Scottie Scheffler Does Is Win: There’s not too much else to say about Scheffler’s performance this week. Adjectives to describe his four-day stretch would be solid, clean, and opportunistic. He shot under par all four days and carded 21 birdies. With his win, Scheffler is the fifth world No. 1 to come into Masters week and walk away with the green jacket.

The heater this man is on is almost unfathomable, as he’s now won four of his last six starts and is just the first player to win four times in a PGA Tour season by the end of the Masters since David Duval managed to do the same in 1999.

If there’s one shot to look back on during Scheffler’s final round on Sunday, it’s the chip-in on the Par 4 third. After coming up short on his approach shot, he jarred his third to walk away with a birdie.

Runner-Up Rory And His Sunday Fireworks: This week marked Rory McIlroy’s eighth attempt at completing the Grand Slam by winning a green jacket, and it was by far the lowest he’s flown under the radar entering the week during that eight-year stretch. He didn’t get the job done, but he certainly gave it his all on Sunday carding an 8-under 64 to tie the lowest final round score in Masters history. He finished the round in style, too, holing out from a greenside bunker on the 18th.

McIlroy’s game was there this week, there’s no question about that, as he managed to hit 50 of 72 greens in regulation. He’ll look back on a cold putter on Thursday and a couple of mistakes in the opening two rounds as his ‘what ifs’ when reflecting on this year’s Masters.

Cam Smith Can’t Catch Up: The Aussie got off to a dream start on Sunday with birdies on both No. 1 and No. 2 cutting his deficit to Scheffler to just two shots. You could feel the momentum swaying to Smith’s favor, but that quickly changed on the third hole when Scheffler chipped in for his birdie and Smith walked away with a bogey.

Smith managed to shoot one-under on his opening nine in the final round, but Scheffler clipped him by one to extend his lead to four with just nine holes remaining. Playing catchup with the No. 1 player in the world at the back nine on Sunday is a tall order for anyone.

The 28-year-old now has four Top 10 Masters finishes to his name, three of which came in his last three starts.

The 12th Hole Delivers Drama Yet Again: Just when Smith grabbed a bit of momentum back with a birdie on No. 11, the 12th hole reached out and took it from him just like we’ve seen it do countless times before.

Smith stepped to the 12th tee three shots back of Scheffler and walked off the green six shots back. He found the water with his tee ball, missed the green with his third shot and things continued to spiral.

The 2022 Masters ended on the 12th hole. Scheffler got up and down for a par, while Smith walked away with a triple bogey.

Cam Smith birdies 11, one of just a few all week, to keep within striking distance of Scheffler.

Steps to 12 tee, feeling it and ready to pounce.

Walks off the green with a triple and six shots back. This all happened in 15 minutes time.

Golf, what a game.

Tiger Woods’ Unbelievable Effort: Woods could have gone out and shot 83-86 on Thursday and Friday to miss the cut and we’d still have to applaud him given the fact that the man was close to death and possibly losing his right leg 13 months ago. The fact that he made the cut, and shot 1-under on Thursday, was just an added bonus.

Woods walking 72 holes, plus plenty more during his practice round, at the Masters at the age of 46 not long removed from a horrific car crash is utter insanity. He may have shot a pair of 78’s on the weekend, but that’s not the story.

The story is him simply being able to get out of bed and compete with the world’s best. Woods’ pace may have slowed down every day this week and he may have had a noticeable hitch in his step walking off the 72nd green, but there’s no question his desire and ability to compete is still there.

Justin Thomas Was Close, But Not Nearly Close Enough: You have to have it all four days to win the Masters, and Justin Thomas’ 76 on Thursday shows that he didn’t. He managed to play the final three rounds at five-under par thanks to an impressive 67 on Friday, but has just a T-8 finish to show for it.

The Masters has always felt like a tournament Thomas is supposed to win at some point in his career ever since he burst onto the scene. He has every tool to get the job done at Augusta National, at least that’s what the eye and numbers tell you. As long as he’s playing above-average heading into Masters week he’ll always be a name everyone circles.

Collin Morikawa Is Figuring August National Out: Collin Morikawa and Rory McIlroy clearly fed off of each other’s energy on Sunday as the two combined for a score of 13-under par. While he couldn’t keep pace with McIlroy’s historic round, Morikawa’s final round 67 was mighty impressive.

He admitted earlier in the week that during his first two Masters starts he strayed away from playing his patented cut on certain holes. This week, he stuck to his own game plan en route to a solo fifth-place finish. While his left to right shot shape doesn’t necessarily fit the mold, it worked out pretty well for the 25-year-old.

Collin Morikawa sees McIlroy's chip in and answers with his own. #themasters pic.twitter.com/jGiEEdR1Gu

Will Zalatoris Sure Likes Augusta National: Will Zalatoris shined in his Masters debut a year ago with a solo second finish behind Hideki Matsuyama. Plenty of people thought that it was perhaps first-timers luck and that Zalatoris wouldn’t follow that up with another strong outing this year. Those people were wrong.

Zalatoris surged up the leaderboard with a final round 67 on Sunday en route to a T-6 finish. Two Masters appearances and your worst finish being a tie for sixth is not bad, it’s not bad at all.

He looked more and more comfortable on the greens as the week went on, and when he can start a Masters week with a warm putter, watch out.

Shane Lowry Continues To Be A Threat: The Irishman entered Masters week in strong form and happened to be a number of people’s pick to put on the green jacket on Sunday. While he settled for a T-3 finish, his performance this week made it clear he could be a threat for a green jacket in years to come.

Lowry’s short game is elite and saved him a couple of times this week as he hit just eight greens in round one and 11 in round three. Nevertheless, if he can manage to hit a few more greens in regulation in future Masters he’ll be right at the top of the leaderboard just as he was this time around.

The Masters Is Just The Best: There’s not another sporting event in the world that competes with the Masters. It’s an event that truly never disappoints. Scottie Scheffler ultimately ran away with this year’s green jacket, but it was still an unbelievable week of golf.