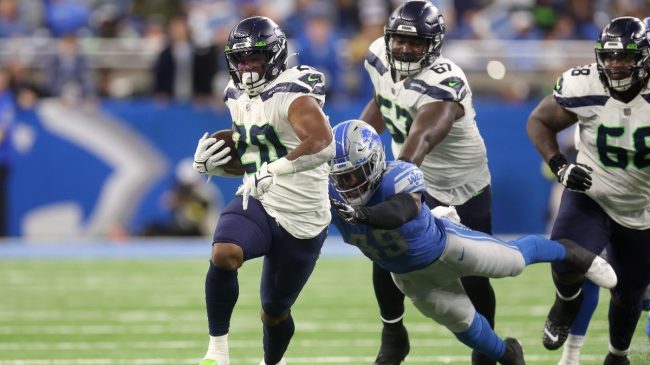 The Seattle Seahawks and Detroit Lions may have just played the most exciting game of the 2022 season. Although neither team looks like a playoff contender, they didn’t shy away from scoring points. With that in mind, the two franchises made NFL history on Sunday.

We have a scorigami alert! The 48-45 final score between Seattle and Detroit is the first time a game has ended with that specific score in league history. Geno Smith and Jared Goff were scoring at will throughout this matchup, making this odd matchup one of the most exciting we’ve seen so far this season. The Seahawks likely enjoy this stat a bit more though, as they walked away with a win.

In addition to making NFL history, each team stacked the stat sheet offensively. The Seahawks and Lions combined for over 1,000 yards and 93 points on Sunday, per Dov Kleiman. Usually, we see two of the top teams in the NFL light up the scoreboard. However, this time around, Seattle and Detroit gave fans everything they wanted to see.

Who would've thought, the highest scoring game in the NFL this season is the #Lions–#Seahawks with over 1,000 yards combined and 93 points.

And Lions are playing *without their top two WRs and RB1.

Geno Smith threw for 320 yards and two touchdowns off of 23 completions. Meanwhile, Jared Goff put the team on his shoulders and recorded 378 yards, four touchdowns, and one interception. At the end of the day, this contest was basically a firework display, despite that fact, nobody saw this coming. Especially considering the Lions were without three of their top weapons on Sunday.

The Seahawks officially move on to a 2-2 record, keeping them within reach of the NFC West crown. As for Detroit, they’ll aim to get back in the win column in Week 5 as they face off against the New England Patriots.