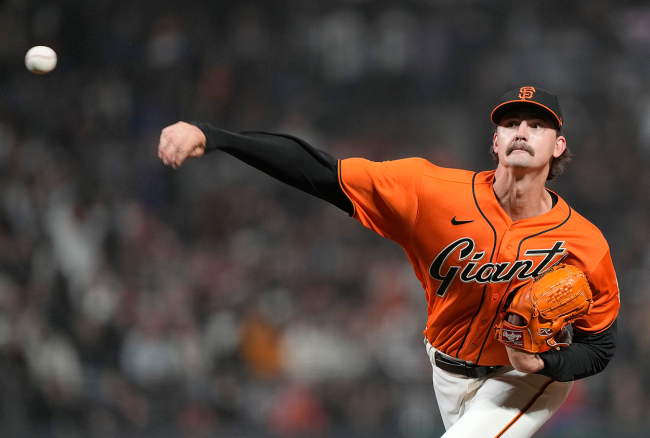 Ahead of Friday’s game against the Cardinals, the San Francisco Giants called up their top pitching prospect Sean Hjelle. He is very tall.

The HIGHEST of high-fives to Sean Hjelle for making his MLB debut tonight for the @SFGiants ☝️✋ pic.twitter.com/QJDPvPKjvN

Hjelle, a 25-year-old righty, was the 45th overall selection in the 2018 MLB Draft after playing three years at Kentucky. While with the Wildcats, as a sophomore in 2017, he was named the SEC’s Pitcher of the Year after going 9-2 with a 3.17 ERA.

In addition to his dominance on the collegiate level, Hjelle has the perfect frame to pitch on the next level. He stands 6-foot-11, 228 pounds.

Oh, and he rocks a sweet mustache— which everybody knows adds a few extra miles per hour onto a fastball.

Sean Hjelle showed up to spring training with a sweet mustache. The Giants had no choice but to let him make his debut in May. pic.twitter.com/aCDENAv56B

After getting the call-up during the day, Hjelle was told to start warming up during the fifth inning of his first-career MLB game.

6-foot-11 Sean Hjelle is warming up in the bullpen 👀 pic.twitter.com/AS3azvmjr1

When the seventh inning rolled around, it was his time. Hjelle was brought out for one inning of relief in his big league debut and did not allow a hitter to reach base.

The slider that Hjelle used to record his first-career strikeout was nasty.

By entering the game at 6-foot-11, Hjelle made history. He is now tied for the tallest player to ever make an appearance in an MLB game with former journeyman pitcher Jon Rauch. And, ironically, he plays for the Giants.

However, Sean Hjelle claims that he is 6-foot-11 — and a half — which would make him the tallest MLB player of all-time.

Hjelle and his wife Caroline have two children, and they were all in attendance on Friday night. As their husband and father toed the Major League rubber for the first time in his career, the emotions ran high for what was an incredible moment.

Sean Hjelle made his major-league debut for the Giants tonight, and his wife Caroline and son George were both there for the emotional moment.

SEAN HJELLE: “We ask a lot of our families, so the fact that they were here…I could not have asked for anything more." pic.twitter.com/DFK32Qhq6m

After mowing down the first three batters he ever faced on the highest level, Hjelle’s place in San Francisco’s bullpen appears to be locked in for the foreseeable future. All that Hjelle has left to do is to verify his extra half inch and stand alone as the tallest to ever do it.