Sean McDonough Opens Up About ‘Awkward’ MNF Stint With Jon Gruden, Who Didn’t Want To ‘Engage In Conversation’ 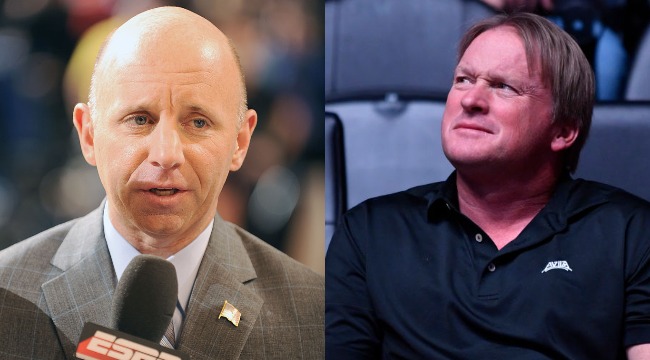 McDonough cap-tipped Gruden’s legacy and claimed he enhanced the broadcasting team before congratulating him on signing on to coach the Raiders.

Gruden, who at the time hadn’t officially been ushered in as head coach, gave the most vanilla response imaginable for anyone who spent nearly a decade doing anything, moving quickly to change the subject.

“Nothing’s official yet, but these Chief fans have been on my case since I got here. What a great place for a big game.”

Gruden was given another shot to dig below the surface after the game, and despite Sean McDonough almost sobbing, the most we could get from Gruden was something that resembled a handshake.

It sounds like this broadcast in 2018 was a microcosm for what now McDonough is classifying as an “awkward” (at times) on-air partnership.

Appearing on the SI Media Podcast with Jimmy Traina, the sportscaster opened up on the unexceptional dynamic between the two and attributed Gruden’s unwillingness to waver from the X’s and O’s of the game.

“I think, to be totally candid, Jon Gruden enjoyed the X-and-O part of it,” McDonough told Traina. “He loved the telestrator. He told me when I first got the job, ‘I don’t like stories.’ So he didn’t want the stories and he didn’t want to engage in conversation. There were times when I would ask him a question or make a point and he didn’t respond, and I think it was just because he was so focused on, ‘I’m gonna dive into this play,’ and he just didn’t want to do it.”

“There were times it came across as being awkward, and it was awkward,” McDonough said. “It was awkward for me. You’re standing there next to somebody wondering, ‘If I ask him a question about this, is he gonna answer it or is he gonna be annoyed that I asked him?’ So it was uncomfortable. . . . The part of it that bothered me was the narrative of some people in your line of work, ‘Oh, well that was a little too big for McDonough.’ I did the World Series when I was 30. I don’t think anybody thought I was nervous or out of place.”

McDonough went on to say that he has no animosity towards Gruden for his skillset, even after the producers leaned into the analyst-driven broadcast. But he also claims that he thought the product was “fine,” when it could have been “great.”

More conversations about Jon Gruden getting fired by the Bucs while he’s sitting right next to you. Give the people what they want.