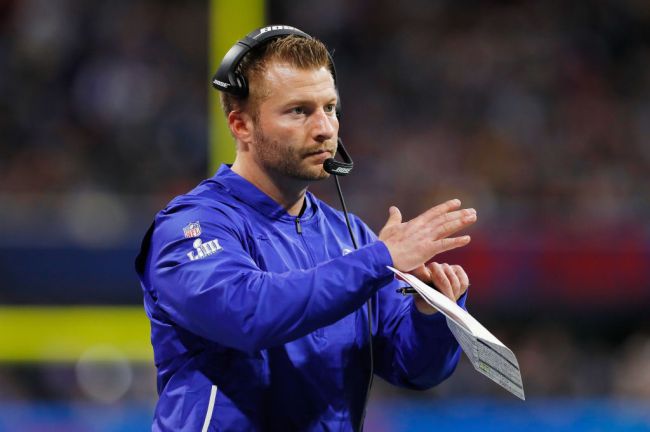 I love watching a coach that just loves the game of football. You can tell immediately from a pre or post-game presser which coaches in the league can talk football for hours upon hours and have no issue with it. It’s truly a beautiful thing to see. One of those guys is none other than the Los Angeles Rams head coach himself, Sean McVay.

The Rams, who currently sit at 9-4 in the NFC West, were enjoying a week 14 bye week while prepping for what some would consider another bye week against the Jets in Week 15. However, the young head coach McVay decided to spend his “off” day doing nothing but watching football the entire day, just like the rest of us.

Fox Sports’ Peter Schrager shared the news on Twitter. His fiancee Veronika Khomyn asked him if he wanted to do anything else.

Just spoke with Sean McVay who says he spent his Sunday "off" on the couch watching twelve straight hours of football on The Red Zone.

His fiancee Veronika asked him if he wanted to do anything else.

You’ve got to love this not only if you’re a Rams fan, but a football fan in general.

McVay finally has some downtime to enjoy with his fiancee and all he wants to do is watch some pigskin. I respect the hell out of that even though his fiancee may not agree with me here. Just a young man dedicated to his craft and nothing else. For the love of the game.

This tweet immediately sparked the gambler in me and makes me want to hammer the Rams -17 line knowing McVay has had a full week to prep for maybe the worst football team of all time in the New York Jets.