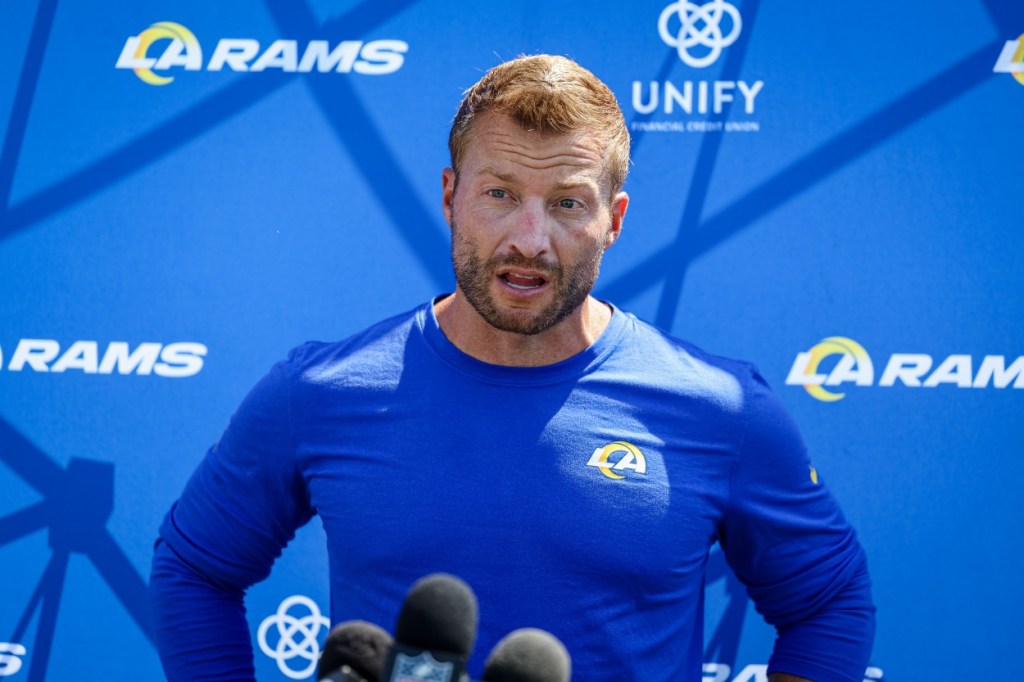 Aside from Sean McVay being a real-life person and the head coach of the Los Angeles Rams and Ari Gold being a fictional character from Entrouage, they’re basically the same person. At the bare minimum, the similarities are staggering.

A recent in-depth profile of Sean McVay by ESPN’s Seth Wickersham who recently wrote It’s Better to Be Feared, the best book about Tom Brady yet, actually calls out Entourage in the article. Wickersham writes that McVay’s inner circle actually planned for and tried to get him to move to Los Angeles and remain single so they could all share a mansion in the hills like “a football Entourage“.

But it’s a quote in the article from Sean McVay while speaking with the ‘Rams brass’ after meeting Matthew Stafford in Cabo that really solidifies the Entourage connection for me. He speaks just like Ari Gold, saying what’s on his mind with no regard for sugar-coating a message just because someone might not like profanity. Personally, I love it. I can’t tell you how many emails I’ve received from people angry about the use of profanity…

For context, Sean McVay was on vacation in Cabo San Lucas shortly after the Rams lost to the Packers in the Divisional Round. McVay was feeling the heat over Jared Goff and his $134 million extension that Sean had championed. But he found out long-time Detroit Lions quarterback Matthew Stafford was also vacationing there AND, more importantly, that Stafford was ready for a change of scenery.

They met for drinks poolside, talking football. A bond forged over sun and booze. McVay returned to his hotel and, “a few tequilas in,” he says now, hopped on a FaceTime with Rams brass, unleashing a plea that’s now legendary around the team’s office. “Here’s the f—ing deal, OK? We can sit here and exist, and be OK winning nine to 11 games, and losing in the f—ing divisional round and feel like, ‘Oh, everything’s OK.’ Or, we could let our motherf—ing nuts hang, and go trade for this f—ing quarterback, and give ourselves a chance to go win a f—ing world championship. You ready to f—ing do this or what?”

According to Seth Wickersham’s account, nobody pushed back on Sean McVay’s assertations. Instead, there were some laughs and then they immediately sprung into action to sign Stafford who would join the Rams within days of their fateful meeting in Cabo.

The Rams began the season 7-1 before stumbling. They’d lose 3 in a row in November and the sky was falling.

“It was a f—ing joke how pissed and how — I can’t even articulate. The disgust. The sickness. The constant pit in your gut. You have to fight what you’re feeling. You have to get up and lead and really authentically be able to demonstrate the strength that I think is a responsibility and necessity for a good leader — while not minimizing that I’m a human being too, and I f—ing hate this s—.”

Instead of allowing his feelings of dread to infect the locker room, Sean McVay retreated and relied on the leadership of FSU legend Jalen Ramsey and former Bucs head coach Raheem Morris. It was Morris who pulled Sean out of his funk. And you should definitely head on over to ESPN to read Seth Wickersham’s account of it because it’s all fascinating anecdotes of how the Rams’ dream Super Bowl season came about.

Also be sure to check out Seth Wickersham’s NYT best-selling book on Amazon: It’s Better to Be Feared: The New England Patriots Dynasty and the Pursuit of Greatness. Full disclosure, as an amazon affiliate partner we would get a small commission if you buy through that link but you could just google the book yourself if you’d rather us not get the few cents as a kickback.

Sean McVay is here to stay in LA. We can go down to the bay, make things outta clay. What do you say?https://t.co/hruZvCzBwL