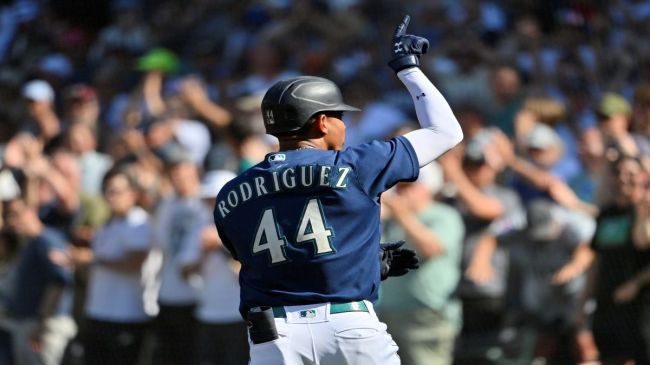 Seattle Mariners rookie has become an absolute superstar in his first year in Major League Baseball. The 6-foot-3, 228-pound outfielder has absolutely mashed at the plate and impressed in the field as well.

Rodriguez is hitting .269 with 20 home runs 64 RBI thus far this season and the Mariners currently hold the final wild card spot in the American League. While he quickly became a household name in Seattle, Rodriguez became a nationwide star at this year’s Home Run Derby.

The rookie hit bombs left and right to reach the finals against fellow young Dominican superstar Juan Soto. Soto eventually walked away with a 19-18 victory. But Rodriguez walked away away with a check bigger than any he’d seen before.

Now that’s all about to change, and in a very significant way.

According to multiple reports, Rodriguez and the Mariners agree to a massive long-term contract extension on Friday.

Jeff Passan of ESPN reports the deal is for 14 years and guarantees Rodriguez $210 million dollars. But escalators and incentives could more than double that figure.

The structure of Julio Rodriguez's massive extension is very complicated, but the topline details, sources tell ESPN: $210 million guaranteed over 14 years with the ability to grow to well over $400M. Includes player and team options.

The great @JesseSanchezMLB was on the deal.

With the add-ons, the deal exceeds the 15-year, $440 million deal the Washington Nationals reportedly offered Soto. Soto rejected that deal before being traded to the San Diego Padres shortly after.

Seattle fans were more than a little happy to see their team lock down its biggest superstar since Ichiro Suzuki’s retirement in 2019.

What an absolutely epic day! https://t.co/jTKjMP7Ku3

Seattle hasn’t made the MLB postseason since 2001. The 20-year playoff drought in the longest in the Major Leagues by far. But with Rodriguez in toe, that could quickly come to an end. In fact, the Mariners are setting themselves up to be contenders for years to come.