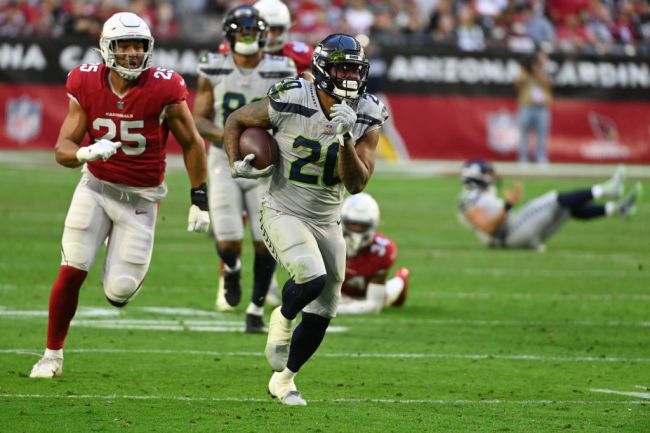 The Seattle Seahawks’ offense has been the source of much conversation this offseason. They traded Russell Wilson. Then they were named as a potential landing spot for Deshaun Watson. That didn’t pan out, but they are still expected to find a better option than Drew Lock to throw to Tyler Lockett, DK Metcalf, and Noah Fant.

However, with all of the talk about their QB situation, their running back situation has flown a bit under the radar. Chris Carson signed an extension with the Seahawks last season, but missed most of the season with a neck injury that required surgery. At the end of the year, Rashaad Penny stepped into the starting job and made the most of the opportunity.

Penny ran for 671 yards and 6 touchdowns over the last 5 games of the season and now he is being rewarded for that effort. According to NFL insider Ian Rapoport, the Seahawks signed Penny to a 1-year deal today worth at least $5.75 million.

Sources: The #Seahawks are in agreement on a 1-year deal with one of their own — RB Rashaad Penny. The former first-rounder turned down more money elsewhere to build off his stellar second half of 2021. He gets $5.75M with ability to earn up to $6.5M.

With questions surrounding Carson’s health and only one year left on his deal, it makes a lot of sense for the Seahawks to keep Penny around after spending a first round pick on him just four seasons ago.

Penny has shown flashes of the player Seattle expected him to be when he has played, it has just been a struggle to keep him on the field. If he can stay healthy next year and continue to produce like he did at the end of this past season, giving Penny another year to see if can consistently maintain his health is a move that could pay off for the Seahawks.