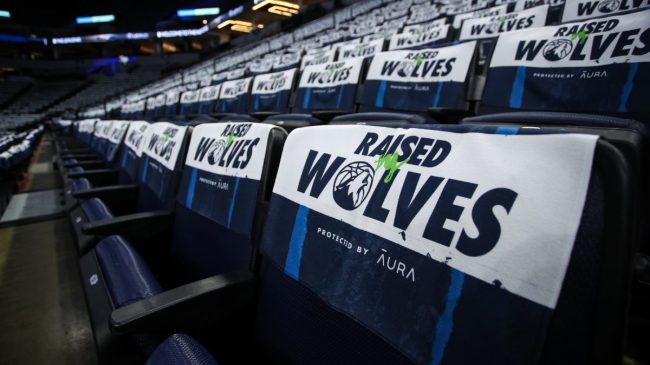 The Minnesota Timberwolves are dealing with a ton of backlash for the sins of their owner, Glen Taylor.

In the past few weeks, there have been a number of protestors attempting to interrupt Minnesota basketball games as they speak out against Taylor’s inhumane killing of chickens on his farm.

We’ve seen a woman glue herself to the court. We’ve seen another fan chain herself to one of the baskets. With all of this action, the security team has to be ready for anything.

On Saturday, we saw some of that training and heads up awareness come into play. In yet another attempt to make a statement, one fan protestor sitting in the second row tried to make a break for the court in the middle of play. A security guard just a few seats down thwarted the attempt with the quickest reaction time you’ll ever see.

watch the second row, the security guard was putting in detective work pic.twitter.com/09fFb0Zvrd

Just as the fan gets up from her seat, the guard leaps over the first row to take down the protestor. The tackle momentarily stopped the game, but the quick reaction from security helped keep the stoppage to a minimum.

And with great form, to boot. Here’s another angle.

Another fan, who was attempting to film the protest, was escorted out, too.

Two protesters were sitting in the second row at tonight's Grizzlies–Timberwolves game. The one who did not make it to the court was taken out by security

The protests don’t seem to be affecting the Timberwolves in a negative way. In fact, they’re now a perfect 3-0 when a fan runs out onto the court compared to a winless 0-2 in games where there have been no protests.

The series heads back to Memphis on Tuesday, so we should get a break in the protesting. We’ll see if the Timberwolves can pull out their first road win in playoff action as they look to survive and advance to round two.