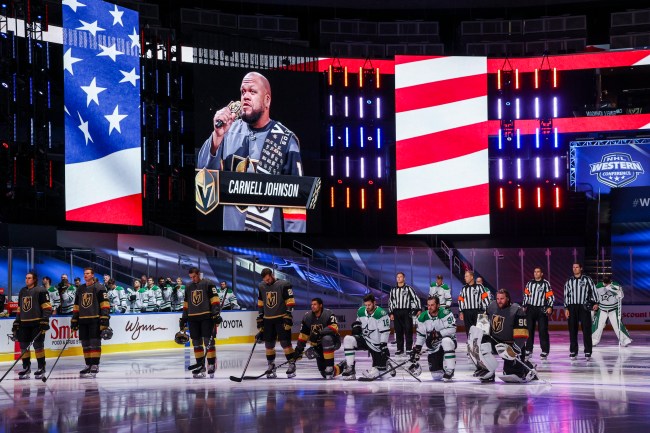 Over the weekend, Minnesota Wild defenseman Matt Dumba became the first NHL player to kneel during the anthem while inside the NHL bubble and it seems like he’s inspired others in the league to do the same.

Minnesota Wild player Matt Dumba became the first NHL player to kneel during the U.S. national anthem ahead of the opening playoff game between the Edmonton Oilers and Chicago Blackhawks in Edmonton, Alberta. https://t.co/rPoydzwejo

Matt Dumba gives a speech and takes a knee during the US National Anthem before the games begin in the Edmonton Hub pic.twitter.com/1DvKAl2Q8Y

On Monday night, four other NHL players forward Ryan Reaves, goaltender Robin Lehner of the Vegas Golden Knights and forwards Tyler Seguin and Jason Dickinson of the Dallas Stars took a knee during the playing of the U.S. national anthem before the teams’ round-robin game in Edmonton, Alberta.

Before Dumba decided to kneel over the weekend NHL players had gone a week without kneeling during the anthem.

We’ll have to wait and see if more players come for and protest during the anthem in the upcoming days.