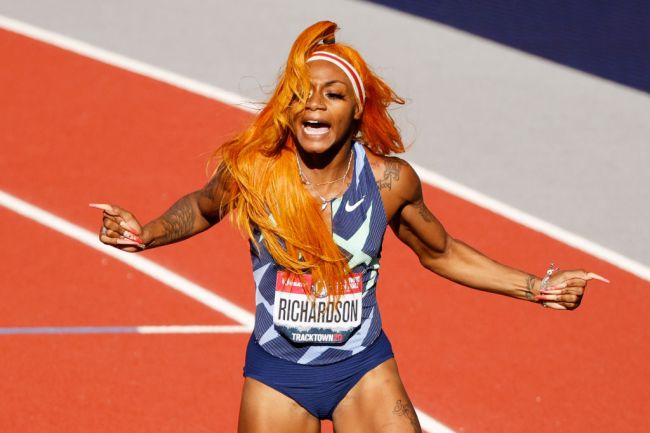 An American woman has not won the 100-meter dash at the Olympic Games since 1996, but Sha’Carri Richardson has a chance to change that in Tokyo. The 21-year-old sprinter is unapologetically herself and carries a swagger to the track that hasn’t been seen since Usain Bolt.

Richardson has not run on the world level to date but she announced her arrival during the U.S. Track & Field Olympic Trials. In her first 100-meter heat, she reached a top speed of 24.1 miles per hour and did so with one shoe coming untied. Her orange hair stands out on the track and it looks almost like flames trailing her down the straightaway.

Saturday saw both the semifinals and final for the 100-meter, with the winner booking a ticket to the Games. Richardson dominated her semifinal heat.

A good 10 meters before crossing the line, she savagely pointed at her wicked fast 10.64 time. Notice her nails. Nobody does it like Sha’Carri.

The nails.
The hair.
The attitude.
The speed.

It's all @itskerrii and she's off to to the 100m final tonight on NBC. #TrackFieldTrials21 pic.twitter.com/kPWgSCeSUT

After dominating the semifinal, Richardson geared up for a much closer finish in the final. And by much closer, she still won by a large margin— crossing the line .13 seconds ahead of the second place finisher with a 10.86-second sprint into a headwind.

After breaking the collegiate record in 2019, the former LSU standout forwent her remaining eligibility and turned pro. She burst onto the scene earlier this year when she set a then-world leading time of 10.72 at the Miramar Invitational in April.

Now, she is ranked No. 2 in the world behind 2012 gold medalist Shelly-Ann Fraser-Pryce of Jamaica, who ran the second-fastest time in history earlier this year. Richardson was only .02 seconds off of that time with her semifinal run and she pulled up at the finish.

Immediately after punching her ticket to Tokyo, Richardson ran to her family in the stands.

She then gave a post-race interview that shows what a special human that she is.

So many emotions from Sha'Carri Richardson after her win tonight.

Sha’Carri Richardson is ready to explode. Put the world on notice.